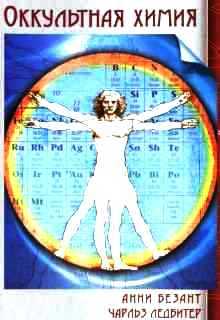 Official science follows the path of positivism: it observes and fixes facts, without drawing any conclusions about them from divine matters. The authors of this book, studying the structure of chemical substances, ask the question: "What does all this mean?" The properties of material objects are considered here as a reflection of processes occurring on subtle plans.

Occult chemistry is an attempt to take a different look at chemical knowledge and answer the question "What does this mean?" If the ideas outlined in this book became widely known at the end of the 19th century, their authors might well be considered the founders of modern nuclear physics. However, at that time, the conclusions of occultists were at variance with the concepts of recognized chemists and physicists. For this reason even the theosophical publishing houses refrained from publishing this book.

Only after many years, many discoveries of Annie Besant and Charles Leadbeater were confirmed by scientific research. At the end of the 20th century, well-known scientists came to the conclusion that Besant and Leadbeater undoubtedly possessed outstanding psychic abilities, which enabled them to observe many phenomena unknown to scientists of their epoch, and accurately and unerringly describe them.

A. Crowley. The Book of Thoth