Adventures of Pinky and Ponki_Chast5_pdf fantasy 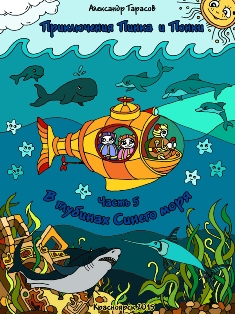 If you are unhappy with a product you purchased, the seller will return your money within 5 days from the moment of purchase.

In the fifth part of an interesting tale bubbles Pink and Ponca, along with their new friend, Captain Mudrik, fearlessly immersed in a small submarine to the depths of the blue sea. Together with caring and faithful spirits of water bold divers explore a coral reef, which is located near the ancient sunken sailboat, and in its hold - a treasure of jewels, which is securely protected toothed guardian. Then underwater explorers sail out to sea and meet with playful dolphins and huge whales. Chasing a big ramp-mantle brave submariners in the thickets of giant algae suddenly encounter unfriendly sword-fish, of which they have to flee.With some difficulty getting rid of the fastest pursuers, curious researchers are at the top of the seamount ruins of the ancient city of giants and explore it in search of ancient treasures. But they have to flee again, this time from a huge shark that lives among the ruins. The chase leads them to a small submarine ice mountain that suddenly becomes the savior of the fugitives. Then daring divers again sent his submarine in the depths of the sea, where all of a sudden they see a mysterious light coming from the underwater city, and soon found to his enigmatic inhabitants. Friendly poseydontsy introduce their guests with their unusual town, show their underwater "park", "garden" and "storage".And then poseydontsy help brave travelers return home. In the book, 53 pages.

In addition to this book up for sale another four-part book - "The Adventures of Pinky and the Ponca in the mountains," "Bubbles in the Underworld", "Bubbles in Zmeygorynovom kingdom", "Journey to the Enchanted forest", as well as the whole book "The Adventures of Pinky and Ponca. Volume 1 ", which includes all five parts.
In addition to stories, sold an interesting book for teens, "Journey to the Sunduki", tells the story of an unusual nature and archeological monuments in the open air "Mountains Sunduki" in Khakassia, which is, according to Professor Laricheva, the ancient astronomical observatory end of the Bronze Age, like Stonehenge. The book is richly illustrated with photographs of the author. In the book, 44 pages.
More for sale photo-album for adults "Faces of the Elementals", which placed 170 photographs images Elementals four elements of Mother Nature. In the book of 146 pages.
Ещё выставлена на продажу книга-фотоальбом для взрослых "Лики Элементалов", в которой помещены 170 фотографий образов элементалов четырёх стихий Матушки-Природы. В книге 146 страниц.

Related to item "Adventures of Pinky and Ponki_Chast5_pdf fantasy":