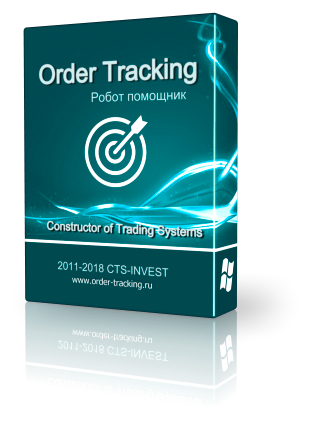 Order Tracking is a robot helper, installed in the trading terminal, and all control is performed directly on the graph in the form of a visual interface.

For example, you want to use the robot to open trades so that he independently calculates the stop and the amount of the lot in accordance with the established risks.
You can also instruct the robot to track the transaction open by hand or another adviser. To do this, you need to use any of 10 trailing stops, for activation of which you can create a goal, when it reaches the necessary trailing stop.

Also, when the goal is achieved, you can set additional conditions, such as closing a part of the lot and transferring to a lossless stop. These are the most necessary actions that we perform in almost any trading system.

The order tracking engine can conduct fully automatic trading, for this you need to create a signal indicator in the designer its pro, and specify its name for input and output if necessary. And after that, the robot will be guided by the signals of the indicator to open and close deals.

So you can create a fully automatic trading system.

More detailed information and examples of the adviser´s work you can see in the overview video.

FEATURES OF THE ROBOT

- Escort of transactions opened manually or by other advisers
- Setting targets, when the trawl will be triggered, close part of the lot and be transferred to at no loss.
- Automatic trading on the signals of the indicator ITS-PRO
- Manual test in strategy tester

WHEN YOU SHOULD BUY THE BONUS ITS-PRO Indicator Designer

WHAT YOU WILL RECEIVE AFTER PAYMENT

1. A program that will automatically install all the necessary files into your terminal
2. Video help on working with an advisor
3. Finished trading systems using this designer
4. Lessons on creating indicators based on trading systems
5. Access to the school, in which you will find many different teaching materials on trade and work with this advisor