Biophysical mechanisms of therapeutic action of bio-resonance therapy. ANALYSIS AND CRITIQUE OF EXISTING ... 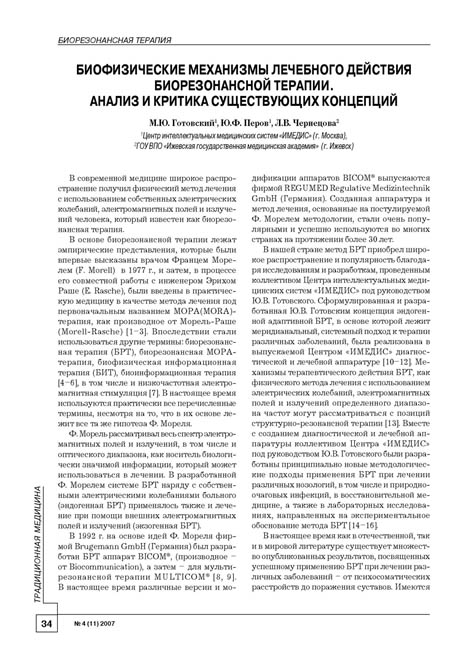 Фастинфосервис information about the seller and his items
offlineAsk a question

In modern medicine was widespread physical method of treatment using their own electrical oscillations, electromagnetic fields and radiation of a man who is known as the bioresonance therapy.

At the heart of bio-resonance therapy are empirical concepts that were first expressed physician Franz Morel (F. Morell) in 1977, and then in the process of working with the engineer Erich Rasche (E. Rasche), were introduced into medical practice as treatment under the original name MORA (MORA) -therapy, as derived from the Morel-Rasche (Morell-Rasche) [1-3]. Subsequently, other terms were used: bioresonance therapy (BRT), MORA bioresonance therapy, biophysical information therapy (BIT), bioinformatics therapy [4-6], including a low-frequency electromagnetic stimulation [7]. Currently used in almost all of the terms, despite the fact that they are based on that same hypothesis F. Morel.

F. Morel considered whole range of electromagnetic fields and radiation, including optical range, as a carrier of biologically important information that can be used in the treatment. The system developed by F. Morel BRT along with the patient's own electrical oscillations (endogenous BRT) is used and the treatment by external electromagnetic fields and radiation (exogenous BRT).

In 1992, based on ideas by F. Morel Brugemann GmbH (Germany) has been designed RCP unit BICOM®, (derivative - from Biocommunication), and then - for the treatment of mul'tirezonansnoy MULTICOM® [8, 9]. Currently, various versions and modifications BICOM® devices manufactured by REGUMED Regulative Medizintechnik GmbH (Germany). Established apparatus and method of treatment, based on F. Morel postulated methodologies have become very popular and successfully used in many countries for over 30 years.

In our country, the method of BRT has gained widespread popularity and thanks to the research and development conducted by a team of the Center for Intelligent Medical Systems "IMEDIS" under the direction of Y. Gotovsky. Formulated and developed by Yu Gotovsky endogenous adaptive BRT concept, which is based on the meridian, a systematic approach to the treatment of various diseases has been implemented in the Center produced "IMEDIS" diagnostic and medical equipment [10-12]. The mechanisms of therapeutic action of BRT as a physical method of treatment using electrical oscillations, electromagnetic fields and radiation of a certain frequency range can be viewed from the standpoint of structural resonance therapy [13]. Together with the creation of diagnostic and therapeutic equipment collective center "IMEDIS" under the direction Y. Gotovsky been developed fundamentally new methodological approaches to the application of BRT in the treatment of various nosology, including natural focal infections, regenerative medicine, as well as laboratory research to experimental validation of the method BRT [14-16].

At present, both in the domestic and world literature there are many published results, dedicated to the successful application of BRT in the treatment of various diseases - from psychosomatic disorders to joint damage. There are also publications, which reflects the results of the laboratory, experimental and clinical-physiological studies of BRT, made in conditions using control groups.

However, since the holding of the control experiments, especially in the clinical setting is difficult to implement, it is not surprising that in this area there are a large number of publications, the results of which are subject to well-founded criticism. At the same time, in spite of 30 years of use in the world of medical practice, the BRT method still does not have a fundamental scientific basis. This was the reason that recently began appearing

Related to item "Biophysical mechanisms of therapeutic action of bio-resonance therapy. ANALYSIS AND CRITIQUE OF EXISTING ...":