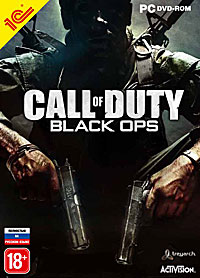 Loyalty discount! If the total amount of your purchases from the seller Nickcd more than:
If you want to know your discount rate, please provide your email:

Instant delivery! Activation Key Code for the game Call Of Duty: Black Ops is displayed in the browser immediately after ordering!

Gameplay:
After the demonstration at the exhibition Gamescom gameplay network resource joystiq published a review of the single-player game Call of Duty: Black Ops. Observer noted that the new game in the series gives the player all that he expects from the Call of Duty: explosions, grenades, a lot of scripts, and at first glance it seems that the gameplay has not changed compared to the previous games of the series. But it is not. The game keeps players in suspense, the pace of the game changes from rapid action before the terrible moments of absolute silence. The author emphasized that the bloody scenes processes updated technology, but the studio did not fixate on the blood and does not emphasize on this. The gameplay looks very nice, but still aimed more at adult players. Although the journalist and played the demo, he noted that what he saw and experienced with the game, it is very pleasant.

Multiplayer:
The multiplayer modes are several command or individual game on a local network or the Internet. Also there is a cooperative mode for four players. Studio Treyarch confirmed that the PC version will be used by the system of dedicated servers.

In connection with numerous innovations that have been added to the game (COD Points, and so on), the studio Treyarch much effort was spent on maintaining the balance in the game.

COD points:
In Call of Duty: Black Ops for the first time presented a unique type of money (Eng. COD points), the player earns for winning games, quests. For the money a player can buy:

• Contracts - tasks for which you can earn experience points, money or a combination of both;
• additional modules for weapons;
• camouflage for weapons and player models.

Obratine note:
• The game works in any country (Region Free), but it can be activated only in the CIS, can help with activation (Activate for you).
• After activation serial key in the steam, the key becomes not valid, ie, re-use it is no longer possible, so be sure to remember all the details of your account! Without them, you will not be able to gain access to active games in the future.

Gift:
• Each buyer who leave positive feedback and a desire to write in the comment to get a gift, will receive steam key to one of a variety of games.
• Distribution of gifts made within 3-7 working days from the date of writing reviews.
• E. mail to a recall is not necessary to leave :)

Wallpapers of the game Call of Duty: Black Ops (CoD: 7)