Colonization of Mars. A way on the sky 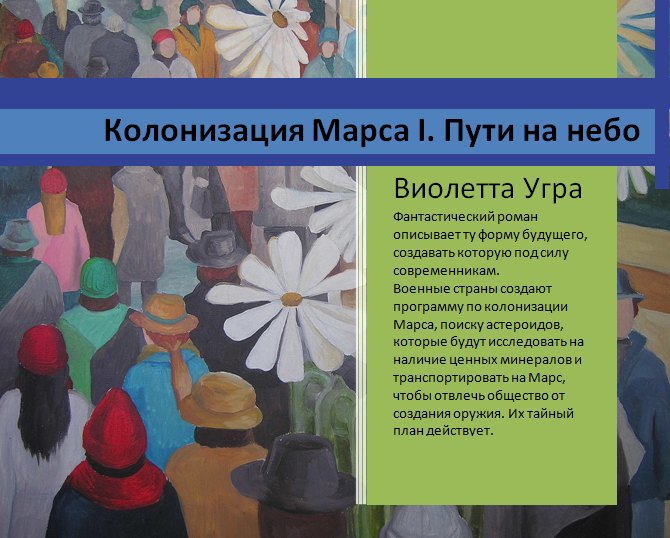 A world without war - the dream of everyone. In the 21st century it seems that she is about to become a reality due to the advent of computer systems. With their help, you can find everything to make automatic, capable to change a person´s life. Due to the leakage of biological weapons the world was on the brink of disaster. Military Russia take an important decision in his salvation: to begin to develop the Mars program. They were able to force the West to go down the same path of development of science, space, protected from the cruelty and irresponsibility of contemporary society. Work begins on the construction of Mars, which is primarily intended for the education of earthlings responsible and decent people. The plan of military science fiction novel can begin to carry out even tomorrow. All of the techniques described in the book are interesting, but they are more difficult to come up with a concept for the development of society, already described than done in practice. The book will appeal to all those involved in technology, virtual reality programming. It is full of humor and descriptions of life, well "packaged" electronics.
Переводчик Google для бизнеса –Инструменты переводчикаПереводчик сайтовСлужба "Анализ рынков"

The book is devoted to the people who have enclosed a particle of the talent in search of decent and noble economists: N to S., V. N., Anna-Anita, Betelgeuse, Outetta, Igor, Irena Rose, Ulyana.
Violetta Viktorovna Ugra lives in the Russian Federation, years worked hard as the analyst of space futurology, the programmer, the architect, the journalist. The project of NPO AT in which she participated has for the first time suggested to begin construction of Mars by means of transportation of asteroids to gather gravitation for existence of the atmosphere.
Summary of the book:
Because of the sloppiness reigning in secret services in the USA there was a leakage of biological weapon. Germany is ready to rebel, the tendency of chaos amplifies, people become more nervous and cruel, say about the plants robots and massacre of people. Military of the Russian Federation have thought up an exit: to create computer programs which will become replacement of a dole and at the same time will begin to bring up people decent. The Russian Federation has no money for large projects, but the Security council hopes to involve in a competition for superiority the West and a part of programs already to run hands of their military. The way was correct. Russia is citizens who have received already new profession. They become elite of society. Their life is noble and beautiful. They hope to create the ecology of Mars favorable for the person therefore they test DNA and live organisms, disinfecting asteroids. There is a difficult fight which purpose is a setting of international relations. The most part of workers of space on Earth, are the witty and beautiful intellectuals, it is possible to call their life equal and similar officer times of Pushkin lyceum. Most of them is engaged in disinfecting of asteroids from radiation, search of protection against her. The police of space sharp-sightedly monitors works, defending the peace from biological weapon. Incidentally several private companies find one of transmitters of the searched closed corporation long ago. Almost by miracle it was succeeded to take one of their owners.

Related to item "Colonization of Mars. A way on the sky":

Colonization of Mars II. Day under a bad star