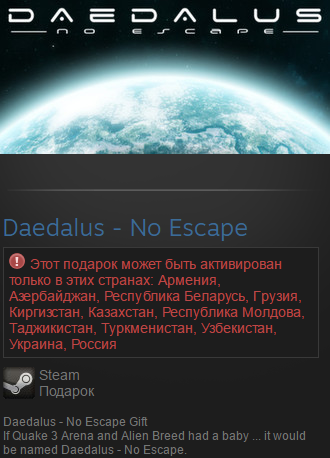 CheapAsChips information about the seller and his items
offlineAsk a question

Ever wanted to play Unreal tournament or Quake 3 Arena from a top down 2D perspective ? Daedalus - No Escape brings you exactly that, the same feel and control as in an arena FPS but from top down, in a dark sci-fi mood inspired by Alien Breed.

In control of a space marine, walk the arena and defeat your opponents using powerful weapons. No feelings, no mercy, only your gun does the talking.

- All goods are unique and delivered only to one person, so the return or replacement in not possible!

- All claims must be made within 30 minutes from the moment of purchase, all claims after that period will not be accepted!

- If the item has regional restrictions (stated in the product description), the seller do not guarantee the work of the game in unintended regions.

How to activate a Steam Gift:
1. Download and install Steam client (if not installed): http://store.steampowered.com/about/
2. Start the client and log into your account or create a new one. https://steamcommunity.com/login/home/
3. Click on the link you have received.
4. On the next page activate your Gift, or accept it into your inventory.