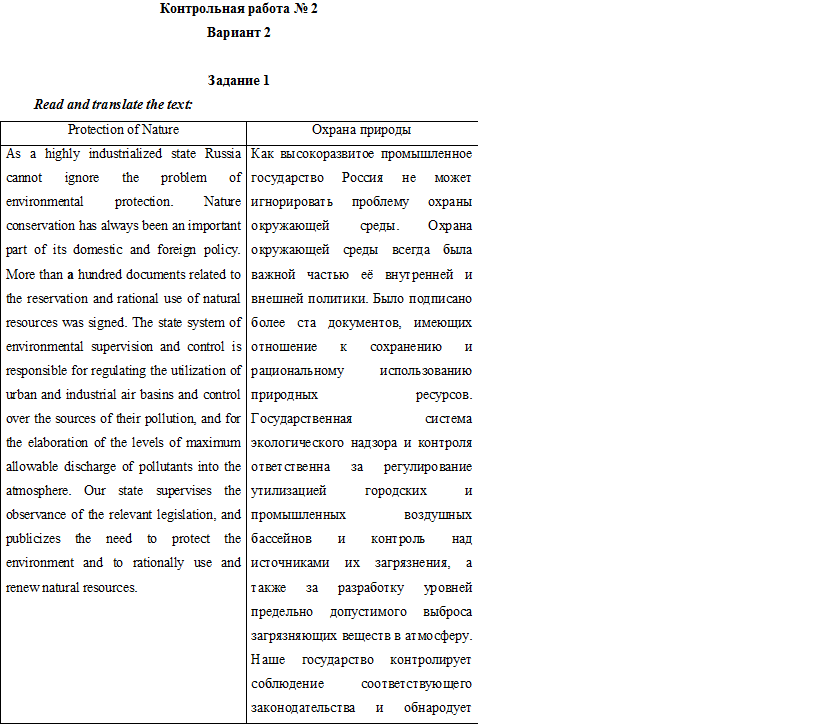 ПОМОГУ ВЫПОЛНИТЬ !!! information about the seller and his items
offlineAsk a question

Verification work number 2
Task 1
Read and translate the text:
Protection of Nature
As a highly industrialized state Russia can not ignore the problem of environmental protection. Nature conservation has always been an important part of its domestic and foreign policy. More than a hundred documents related to the reservation and rational use of natural resources was signed. The state system of environmental supervision and control is responsible for regulating the utilization of urban and industrial air basins and control over the sources of their pollution, and for the elaboration of the levels of maximum allowable discharge of pollutants into the atmosphere. Our state supervises the observance of the relevant legislation, and publicizes the need to protect the environment and to rationally use and renew natural resources.
We can not talk about our state's environmental protection measures without mentioning its extensive international efforts in the field, as environmental protection today has gone beyond the national framework to become an important international issue.
There are many consequences of damaging the environment. One of them is acid rain. Another one is water shortage resulting from abuse of arable lands in agriculture. The third one is destroying the ozone layer of the Earth through pollution from factories and plants. The fourth, problem is damage to water and soils. The fifth one is damage to wildlife: numerous species of an animals and plants and disappear. Lastly, the most serious danger arising from damaging the environment is the result of the above- mentioned consequences. This is the danger for the life and hearth of the man.
The territories of the former Soviet Union are suffering many environmental problems. Apart from the effect of the Chernobyl disaster, the worst problem is probably in the area around the Aral and the Sea. Cotton growing in the region has used huge quantities of water, and the sea level has fallen by 14 yards. This destroyed fishing industry and led to a damage to soils, crops and wildlife. Many forests in the North of European Russia and the Far East are under threat a system of dams on the Volga has caused damage to fish.
If we are unable to learn how to use the environment carefully and protect it from damage caused by man's activities, very soon we'll have no world to live in.

Task 2
Answer the questions:
1. What measures does our state undertake in order to protect the environment and renew natural resources?
2. Why can not we mention the extensive international efforts in the field environmental protection?
3. What are the general consequences of damaging environment?
4. Which of them, to your opinion, is the most dangerous?
5. What territories of the former Soviet Union can be found suffering many environmental problems?

Activity 3
Give Russian equivalents to these words and word combinations:
Nature conservation, rational use, supervision, urban, discharge of pollutants, extensive efforts, consequence of damaging, acid rain, water shortage, disappear, threat.
Task 4
Give English equivalents to the following words and expressions:
Environmental issues, foreign and domestic policies, the maximum allowable, compliance with the law, the consequences of the damage, the destruction of the ozone layer of the atmosphere, destroy, damage is threatened, pollutants.

Task 5
Translate the following sentences into Russian:
1. About two hundred years ago man lived in harmony with nature, because industry was not much developed.
2. Today the contradictions between man and nature are dramatic.
3. Every year world industry throws out into atmosphere about 1000 million tons dust and other harmful substances.
4. The pollution of the air, oceans, seas, rivers and lakes and destruction of the ozone layer could lead our planet to a global catastrophe.
5. As a result, because of water pollution m

Task 6
Translate the following sentences from Russian into English:
1. The environment should be clean.
2. Environmental pollution affects animals and plants.
3. Earth - our home and we have to take care of it.
4. Experts doubt that industrial waste can be used in production.
5. The interaction between man and nature is inseparable from the history of mankind itself.