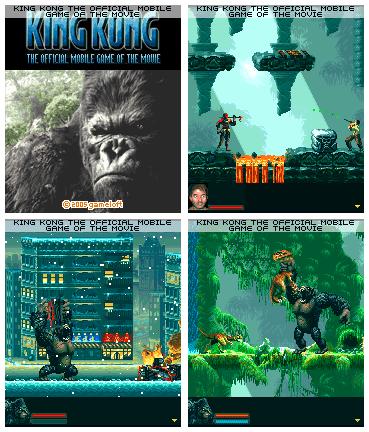 The official game of the latest blockbuster King Kong by Peter Jackson (director of "Brotherhood of the Rings"). The mighty giant gorilla is back on screens. But mobile phones King Kong appears for the first time, but at its best. The most high-quality mobile game of the highest quality mobile developer Gameloft under the official license!

From the wild tropical jungle to the civilized stone jungle of New York City - this is your way. Spend King Kong, save for a Woman, which you love. Straight to the final battle of the skyscrapers, straight to the hurricane fire from machine guns. It is the most striking addition to the film. Do not miss.

In Game:
- Six huge and different levels;
- Detailed graphics;
- Impressions, both from an interactive movie;
- A crazy feeling that you're playing for a giant gorilla, compared to which even the Terminator seems Lego toy soldiers.

WARNING BONUS:
In the positive feedback, we will send you another game from Gameloft, leave your mailbox where to send bonus and a link to any of my items.
If you see that we still have few games, but do not worry, please contact us, we'll send you any game you want.
Soon, our store will be updated with new games from Gameloft!

A set of translations and original books on poker