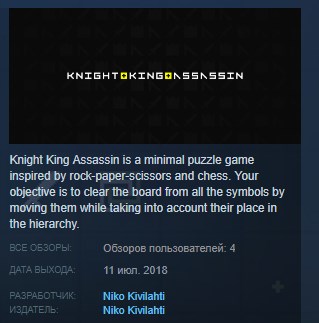 Knight King Assassin is a minimal puzzle game inspired by rock-paper-scissors and chess. Your objective is to clear the board from all the symbols by moving them while taking into account their place in the hierarchy.

KNIGHT
Defeats Assassin but is defeated by King. Moves horizontally and vertically.

KING
Defeats Knight but is defeated by Assassin. Moves horizontally, vertically and diagonally.

ASSASSIN
Defeats King but is defeated by Knight. Moves only diagonally.

DEATH
Knight, King and Assassin symbols have their designated Death symbols.
Destroys itself and the designated symbol. Immovable.

+ More symbols that are introduced later as the game goes on.
+ Minimalist style.
+ 30 Levels.