Manual on the physical training of the armed forces 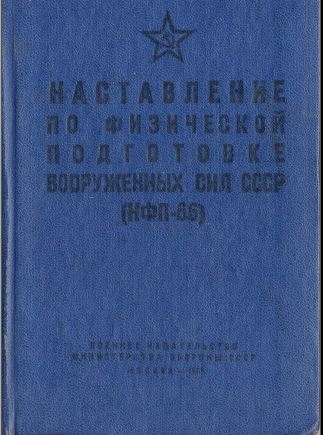 Still, in the Soviet Union were able to create man-made legend for the ages! If the tractor - the "Kirovets", if the tank - make sure the T-34, if the fight - something ... right, Sambo!

The "Institutes of physical training for the armed forces of the USSR" (which no inlet open - everything is the same as "Kirovets" or "T-34") - good old set of techniques of so-called Sambo Federation, which formed the basis of another Oznobishin in the early twentieth-century (speaking in a modern way - "licensed" judo). The time-tested and battle experience arsenal of combat sambo is simple and effective. Fortunately for the student of combat sambo, the book is almost no shots - and this is not surprising: any athlete, possessing besides athletic skills also practical experience, will tell you that quitting is actively resisting the enemy "clean" throw quite difficult - but the harm blow a painful already easier.

technique demonstrated in the book will give odds to almost any part of the replica on the practicality and effectiveness. Yes, there is no beautiful kicks, spectacular shots, but this arsenal can fight and win. In war, it is, perhaps, the most important thing.

Related to item "Manual on the physical training of the armed forces":