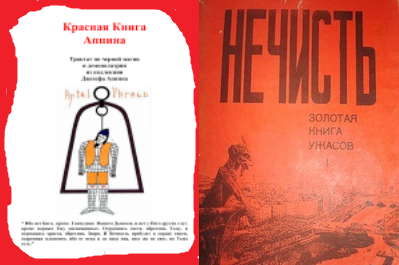 It is said that the "Red Book" was dictated by Vlad Tepesh himself to a certain monk-apostate Cyril. So it is or not, but the devil-worship of the great Romanian commander is an undeniable fact that no serious black adept will deny.
It is known that this document, bound to the blood-red skin of an unknown creature, was kept by the English merchant Joseph Appin (hence the name), who died in 1689 and bequeathed to bury him along with him. Having fulfilled his father´s will, two of his sons later unearthed the grave in order to gain access to a source of terrible, beyond knowledge, but there was no book in it. Apparently, she was stolen from one of the descendants of Vlad and since then she was transferred from father to son until 1869, when she was captured by the Hungarian secret society "Tremalosh", later transformed into one of the subdivisions of the Great Black Lodge under the abbreviation A.S .FROM. The copy was handed over to Pontifex Lodge Johann Kellenheim in 1901 and translated into Polish and German.

The book consists of three sections - ghosts, vampires and demons, each of which is a brief classification of supernatural beings. In every country, every nation had superstitions, signs and signs that foreshadowed the approach of death. For example, stopped or started not in time to beat the clock. A sign of a close death could be a regular candle, if melting wax, draining, enveloped it from all sides, like a shroud. And demons are often described as disgusting animal-like creatures, but you can not underestimate either themselves or their master. In this issue, almost all theologians (theologians) and demonologists are unanimous. If the devil hordes were infirm and stupid, it would be unlikely that they would be able to affect human nature so much, and there would not be so much evil and injustice in the world.