Secrets of the Witch Doctor 4 book 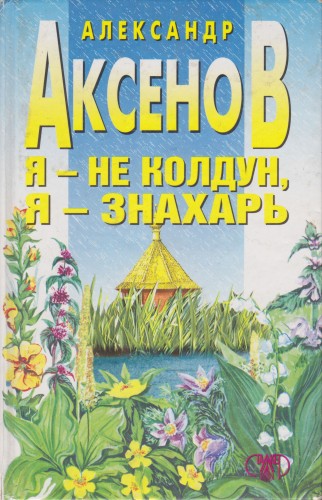 kaplunru information about the seller and his items
offlineAsk a question

In these books deals with the demonic force that brings so much evil people.
Witchcraft ... Where are its origins? What is the reason? How to avoid the influence of witchcraft in everyday life, when building a house, farming, just in a house in the street. How to behave in the church to pray to God. Treatment plots, practical advice on herbal medicine, treatment of male and female diseases, epilepsy. These books will teach you how to take care of not only the physical, but also spiritual health. With higher education, knowing the Scriptures, using his healing practice of prayer, the old recipes, signs, popular beliefs, the author has a logic of scientific thinking, which helps all "sort through", is not alien to him, and mythological thinking. His books have helped many improve their health, to find peace of mind and peace of mind.
Each of us has a mission on earth. AP Aksenov mission - to help those who suffer, to lead them on the path of healing. "Witch, sent to us by God" - so called by the people of Alexander Petrovich. Worldwide, there are admirers of his talent Witch Doctor, the Healer of body and soul. Confession readers VA Fedotova - is no exception.
The first book of Alexander P. "I am - not a wizard, I - witch doctor" I read in one sitting, not standing up. In it, I saw myself. Many of the episodes seemed taken from my terrible life. About witches and sorcerers I heard as a child, about parallel worlds did not have the slightest idea. From the book I learned that there are other worlds, there are creatures that we do not see, and there are people with phenomenal abilities that can enter into the invisible world, can communicate with its inhabitants, can penetrate into the conscious and subconscious, in the innermost secrets of people making one good, the other evil. But the most important and important thing I learned from the book - is that damage can induce "their": acquaintances, friends, godfathers, relatives. I re-read again and again in the book is the place where it is written that do damage (ie. E. Can do), and your own. And it´s a short word of four letters appeared succinct, powerful and magical, that has made a revolution in my life. I did not know, and had no idea that close relatives, godfathers, friends may engage in witchcraft and corruption. Aleksandr Petrovich first publicly announced the existence of evil. After all, none of the healers neither we, nor abroad has not so detailed and frank about the damage, its symptoms and treatment. It offers quite a bit: do pray, attend church, fasting. He says that in each case, the small and the great, the foundation must be good, and if you can not do good, not harm. It calls for the fight against evil spirits. It gives simple tips that can perform one if it is not a predator (carnivore) and not a slave to his desires (this applies to the post). Many have learned from him the first of the commandments of the Lord, of sin, of the main prayers, how to pray and be baptized. How many books in his prayers, that we did not know. He found it necessary to write, how to behave in the home, in society and in the church.
Printed works on the theme of "damage" appeared periodically, even some writing, how to identify the presence of damage, and how to get rid of the damage to the patient described in detail only Aleksandr Petrovich. He shares with us all that he knows. And oh, he knows as much. He - a storehouse znaniy.Ego special gift - to introduce into the hearts of the people faith in God for healing. It is as it merges itself with the grief of people who came, came, or came to him for help. And everyone he finds a kind word, advice and assistance. The fame and prestige it increase with each passing day. His books will surely help more than one generation. The work of his immortality, is what we see with great clarity how enormous power it has been said or written slovo.On one of the Giants, who do good. He is selfless and generous.

1) Aksenov AP, I - the witch doctor. Witchcraft - doom humanity - 1996
Witchcraft ... Where are its origins? What is the reason?
How to avoid the influence of witchcraft in everyday life, when building a house, farming, just in the house and on the street.
How to behave in the church to pray to God.
Letters eyewitnesses about sorcerers and spoilage.
Treatment plots, practical advice on herbal medicine, the treatment of female and male disorders, epilepsy ...
And many other things in the book Witch Doctor Alexander Aksenov.
2) A. P. Aksenov, I´m not a wizard, I - healer - 1997
The book you hold in your hands - unusual. First of all, the fact that it is written by an amazing man - Alexander Petrovich Aksenov, medicine man, as they say, from God.
Sasha-healer, as they call each other Alexander Petrovich his friends and patients, treat herbs, incantations, and, in the first place - the word of God by helping people find the path to recovery, kindness and harmony.
In his book, AP Aksenov not only tells the story of a world that exists in parallel with us, about witches, warlocks, demons, goblins, but also offers a variety of recipes that help restore health, to get stronger spiritually, to avoid the tricks of evil forces.
Nontraditional methods of treatment provided by the author pomog¬li many improve their health, to find peace of mind and peace of mind, to return to the left once the world dobro¬ty laws and prudence. And it is today - the main thing.
3) I Aksenov AP - medicine man ... of witchcraft without retouching - 2000
In this book, the author not only tells about the structure of the angelic world, the holy people, about human suffering, of illness, death, the end of the soul, but also offers a simple definition sposo¬by witches, gives advice on how to sebi wedding at wedding in the church on their wedding night; provo¬dah while in the army, at the christening of how to protect infants from damage de¬tey etc.
The book also contains many recipes trava¬mi treatment, useful tips prayers.
4) Aksenov AP - I-healer. The atrocities of evil spirits - 1986
About witchcraft and deterioration of revenge evil forces. About sins against God, fasting established church of the evil days and hours and much much more is told in the book remarkable man, medicine man from God Aksenov Alexander Petrovich.
Practical advice for the treatment of herbs to help you recover from many diseases.
The book teaches goodness, love, and understanding vzaimoproscheniyu and may be of interest to everyone.

Related to item "Secrets of the Witch Doctor 4 book":