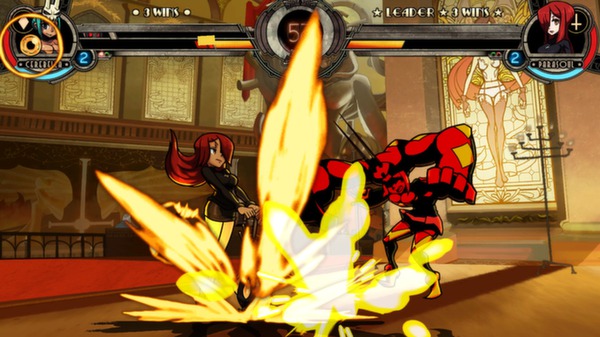 Skullgirls is a fast-paced 2D fighting game in which players control furious female warriors in an extraordinary dark deco world. Featuring an all-new gaming system that puts veteran fighter games to the test while making the genre attractive and accessible to newbies, Skullgirls is a hand-drawn modern challenge to classic arcade fighters in high definition, as well as a one-of-a-kind complete action packed competition with great combos and an intriguing storyline.

Key Feature Points
Classic six-button controls give each character a huge variety of attacks and special moves.
The Variable Tag Battle system allows players to pit teams of different sizes against each other, consisting of one, two or three characters.
Custom Attack Assistance allows you to equip your team with a myriad of different attacks, providing endless strategic opportunities.
A solid defense system against endless combos removes the possibility of using tactics that are abusive from the competitive game.
Fully hand-drawn, high-resolution 2D image with the most animation frames per character compared to other fighter games, backed by the advanced real-time lighting capabilities of a powerful 3D engine.
A functional training system and artificial intelligence designed to teach tactics, as well as the use of movements and combos, make it easier for new players to enter the world of traditionally difficult fighting games and help you improve your skills.
The official GGPO network code ensures lag-free online battles.
A stunning soundtrack from the composer of Castlevania: Symphony of the Night, composer Michiru Yamane, will let you immerse yourself in a unique dark deco world.