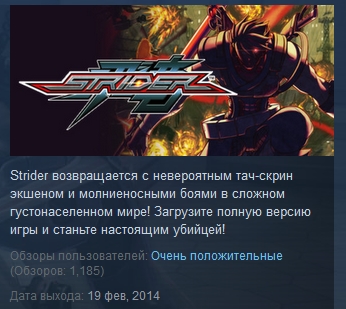 The legendary Strider Hiryu burst onto the screens of personal computers in 1989 and is still a cult character for fans of Japanese slashers. Strider 2014 takes players back to the beautiful, slightly insane world of Japanese heroes and villains.

Strider´s incredible plot twists and turns will send you to the center of the storm. The legendary hero bursts onto your screens and, without further ado, simply smashes enemies into dust in the scenery of a futuristic shinobi world. Tangled corridors, an army of enemies, a stylish soundtrack and selected cranberries - all this and much more awaits you in Strider.

The popular hero of Japanese manga, as usual, constantly gets into trouble. Wanting to save his best friend, he finds himself in the totalitarian world of the Kazakh SSR. During the mission, Strider, by chance, becomes a participant in the confrontation between a resistance squad and a certain Grand Master, who crushed the world war machine. Adventures will lead the legendary hero not only to the futuristic Kazakh SSR, but also to Siberia, into the depths of the Amazon, straight to the enemy base.

Let your fantasy roam the crazy hallways of Strider. Here is the best example of action movies of the nineties with its mind-blowing plot twists and endless fiery action.

Key features of the game Strider:
Cult manga. Meet the epic superhero of Japanese comics who is ready to fight for himself and his country, destroying every daredevil that gets in his way. The bright world of the future, innovative weapons and the madness of what is happening will not leave you indifferent.
Memorable enemies. Androids, robotic soldiers and many mechanical freaks have a memorable appearance and unique attacks. You will remember each fight for a very long time. Nice controls will allow you to completely immerse yourself in a hurricane of combo attacks and blinding special effects - just have time to learn.
Huge world. Explore, seek secrets, jump, climb and run across the vast world without annoying loading screens. Do not be afraid to climb where you were not invited - for sure there is a secret behind another bright billboard.