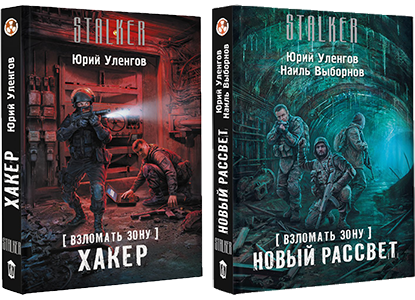 ulengov information about the seller and his items
offlineAsk a question

Software - a professional hacker with a dark past and uncertain future. In pursuit of thrills and easy money, he gets involved in a dubious venture, then, as a result of a daring burglary, are not only money, he thinks himself in the hands of the softs. In the program code stored on a USB flash drive, the key to the hidden features that will change the world. Fleeing persecution, the attacker fled to the exclusion zone, unaware that he had become one of the pawns in the Great Game is still there behind the perimeter. And in Zone game continues. Software will visit the places where you do not ever get to even the most cunning stalker, to solve the riddle of the mysterious "suggestor" and apply their skills there, where to find a use for them at first sight impossible.

After the failure of the operation to expand the Chernobyl exclusion zone, "Children of the Black Moon", or simply black, go for broke. The new battlefield - Solar Brazil. previous rules - any rules. The information before the former rumors were confirmed at the crash site in Rio de Janeiro there was an anomalous zone, as two drops of water similar to Chernobyl. Mutants, anomalies and artifacts - are included. Artur Orlov, in the past - an authoritative criminal, now - is trying to do away with the last fugitive. He makes a small business on the smuggling artifacts of Brazilian areas, but his life is changed when she interfered mysterious hacker who calls himself a soft and sinister group of "New Dawn". Everyday cargo transportation anomalous policy ends in murder and the mad race for survival, with a finish inside the perimeter of the Rio Zone. Orlov will survive in the lethal area, get proof of his innocence and return to the perimeter. And of the assistants - a runaway slave so unprincipled mercenary.