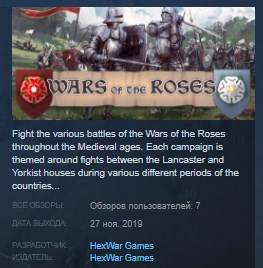 Fight the various battles of the Wars of the Roses throughout the Medieval ages. Each campaign is themed around fights between the Lancaster and Yorkist houses during various different periods of the countries rule.

Capitalize on strategic advantages to turn the tide of war in your favour; ride down your foes with heavily armoured knights, hold the line with bristling ranks of billmen or strike from afar with the famed English longbow and huge pieces of artillery. Will you emerge victorious or become another casualty of war?

Activation
• You are required to copy the link to your Steam account and confirm that your Steam account region is Russia.
• We will add you as a friend and give you a paid game.
• You will see a window with the activation of the gift to the library, the game will remain with you forever.

Related to item "Wars of the Roses 💎 STEAM GIFT RU":