A place under the sun 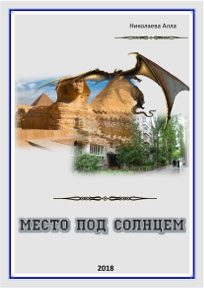 The heroes of these novels fall into another - a parallel world. For example, in the novel “A Place in the Sun”, two friends, Michael and Victor, go to California in 1865. Mikhail falls in love there with a young blonde beauty. Unfortunately for him, it turned out that she was married and it was not in his rules to break up someone else’s family. But fate sometimes turns in a strange way, and your dreams suddenly come true. But what happened to Victor? ..
In the novel “Why We Need the Past”, the heroes are forcibly sent to an ancient time machine in ancient Egypt in order to extract the necessary information for a certain circle of people. After all, ancient Egypt is a complete mystery.
Reading the book, you immerse yourself in the atmosphere of romance, fairy tales, and at the same time you worry about the heroes when they get into very difficult situations. After all, they are in a strange, unfamiliar, unusual world for them. They have to adapt to it in order to survive, because they encounter not only ordinary people, but also different creatures, as in the story “Unknown People”. Heroes really want to go home, but can they?
But in spite of all this, love remains love. And each of them finds its own.

Related to item "A place under the sun":