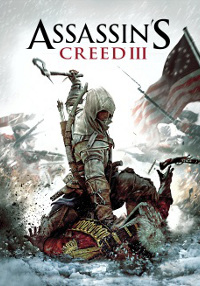 GamingMode information about the seller and his items
offlineAsk a question

Warning! Keys are not suitable for Steam, the game is activated cherep service Uplay.
Game description:
XVIII stolenie was one of the worst in the history of the North American continent. After more than 20 years after the conflict, the 13 American colonies were ready to go to war with their mother country - the British Empire. Bloodshed was inevitable!

Players take on the role of Connor, the son of a girl from the tribe of the Mohicans and the English colonists. Hero was a freedom fighter and took Assassins creed after enemies burned home.

The combat system is Assassins Creed 3 allows you to use two weapons simultaneously, thereby attacking and counter-attacking multiple opponents. In addition to standard methods of the assassin, Connor owns various firearms and bows and tomahawks.

Features:
Destroy your enemies using advanced arsenal of weapons, including a tomahawk, pistols, bows and blades.
Discover the large populous city, bordering the huge and extremely dangerous expanses of wilderness.
The new game engine will make the fight for independence even more colorful and realistic.