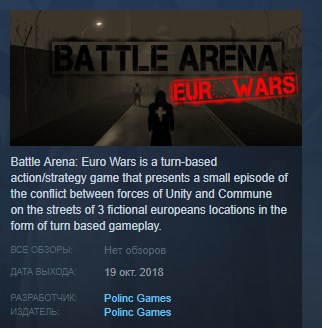 Battle Arena: Euro Wars is a turn-based action/strategy game that presents a small episode of the conflict between forces of Unity and Commune on the streets of 3 european locations.

- 3 maps: Germany, Sweden, Spain.
- 4 mission type: capture the flag, target hunting, get points, kill them all.
- Turn based gameplay in the form of a street fight.
- Single player, offline.
- Player vs 7 bots.
- At least 6 hours of gameplay to finish all missions.
- Two teams.
- 14 characters.
- Over 30 achievements.