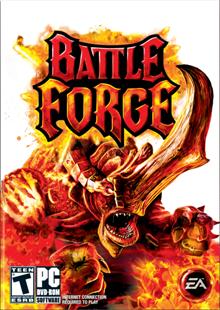 BattleForge - the latest real time strategy game in which you and your friends have to fight against evil. The main feature of BattleForge is something that you can do to simulate his army. Combat units, buildings, spells - all this is represented in the game in the form of maps that you can share with your friends.

In BattleForge players are given the opportunity to use virtual trading cards to build the perfect army and destroy the enemy. Maps will become a weapon of war, and each corresponds to a particular spell, structure or unit that can be accessed directly on the battlefield. With cards, players can modify and create groups of units of different factions, as well as create a unique army, based on your own preferences. Due to the lack of need for the construction of bases and immediate production unit on the battlefield, BattleForge players are instantly immersed into the vortex of rapidly developing events.

Among the game modes BattleForge - single game, co-op scenarios, as well as a duel between two players (PvP). Players can join a team of two or four, and jointly participate in battles. In addition, it is possible to take part in the 12 grand battles for victory in which players receive their awards. To do the job and get a reward in these scenarios, players must combine their efforts. Through participation in joint battles, guild and the use of chat rooms, ample opportunities of doing business, the players participate in the auctions and the exchange of in-game messaging, BattleForge is the first real-time strategy where exciting gameplay combined with social and collective aspects of the MMO.

* Instant creation of units and buildings - the most dynamic RTS with a huge one-card combinations units
* Cooperative game mode 2, 4 and 12 players for the first time - a massive battle with giant rivals for the first time in the history of the genre
* Power over 4mya elements - fire, frost, nature and shadow
* Rating battle tournament system and social aspects

If you are experiencing problems with activation of your game and the serial number you see an error message, we recommend that you do the following:
-Voyti The game in demo mode
-Choose A gold badge «BF» Coins
-Vvesti Your key «BF» Points
-The Game is unlocked to full version
===============================

After payment you will immediately receive an activation key games BatlleForge