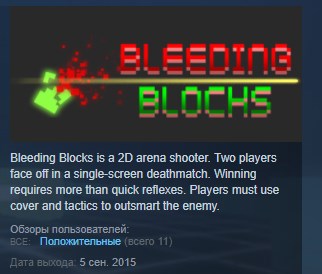 Bleeding Blocks is a 2D arena shooter. Two players face off in a single-screen deathmatch. Winning requires more than quick reflexes. Players must use cover and tactics to outsmart the enemy.

Choose from six unique classes. Will you rush in as the Rogue? Snipe from afar as the Reaper? Or deploy turrets as the Engineer? Play against a deviously smart AI or head to head in local multiplayer mode.