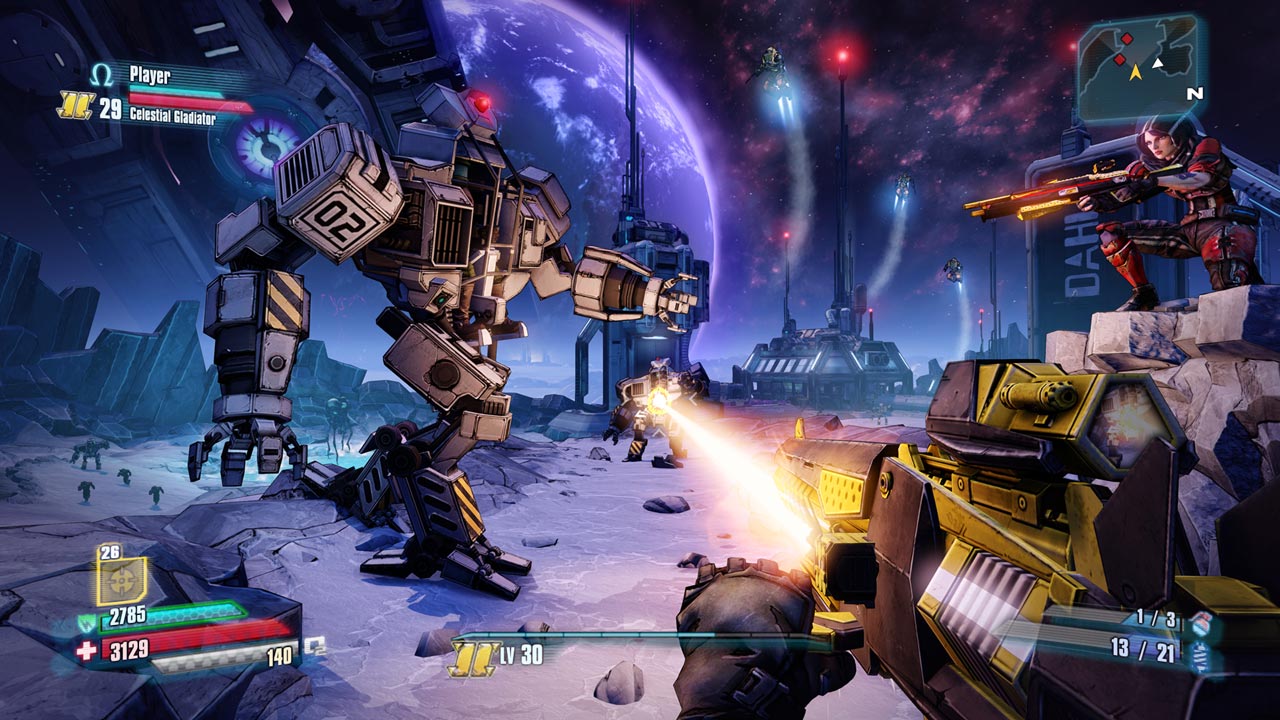 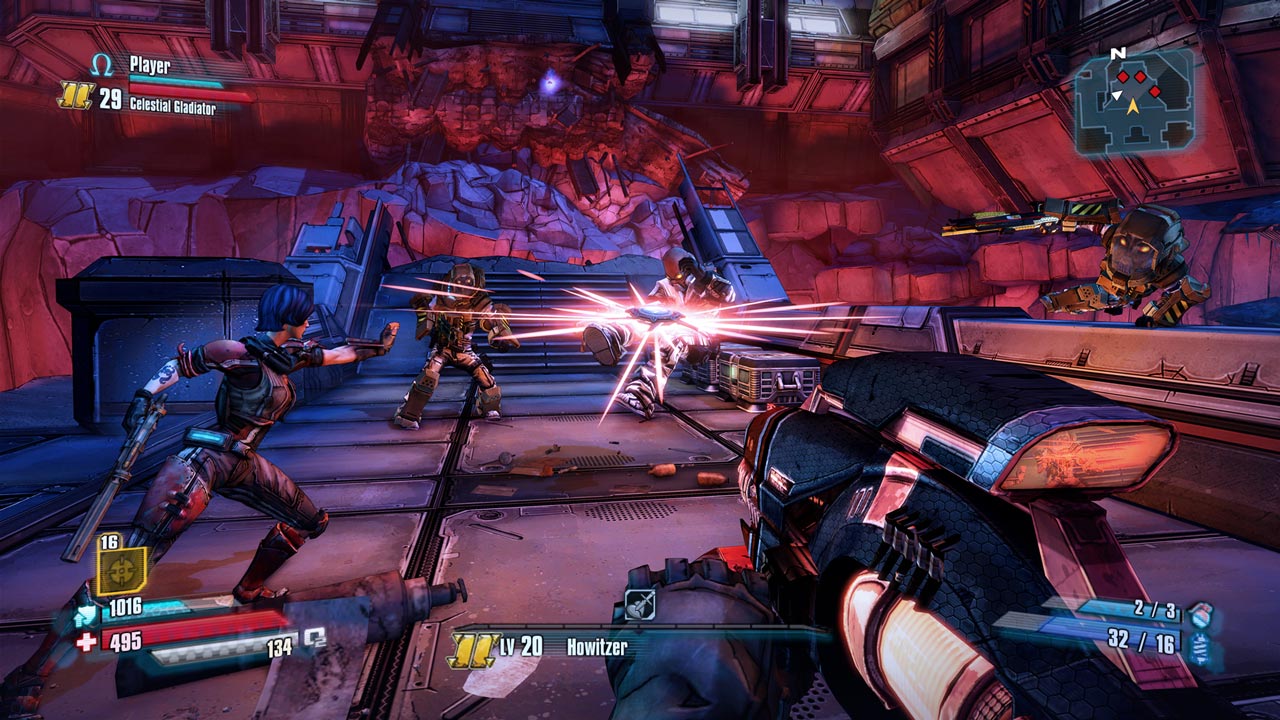 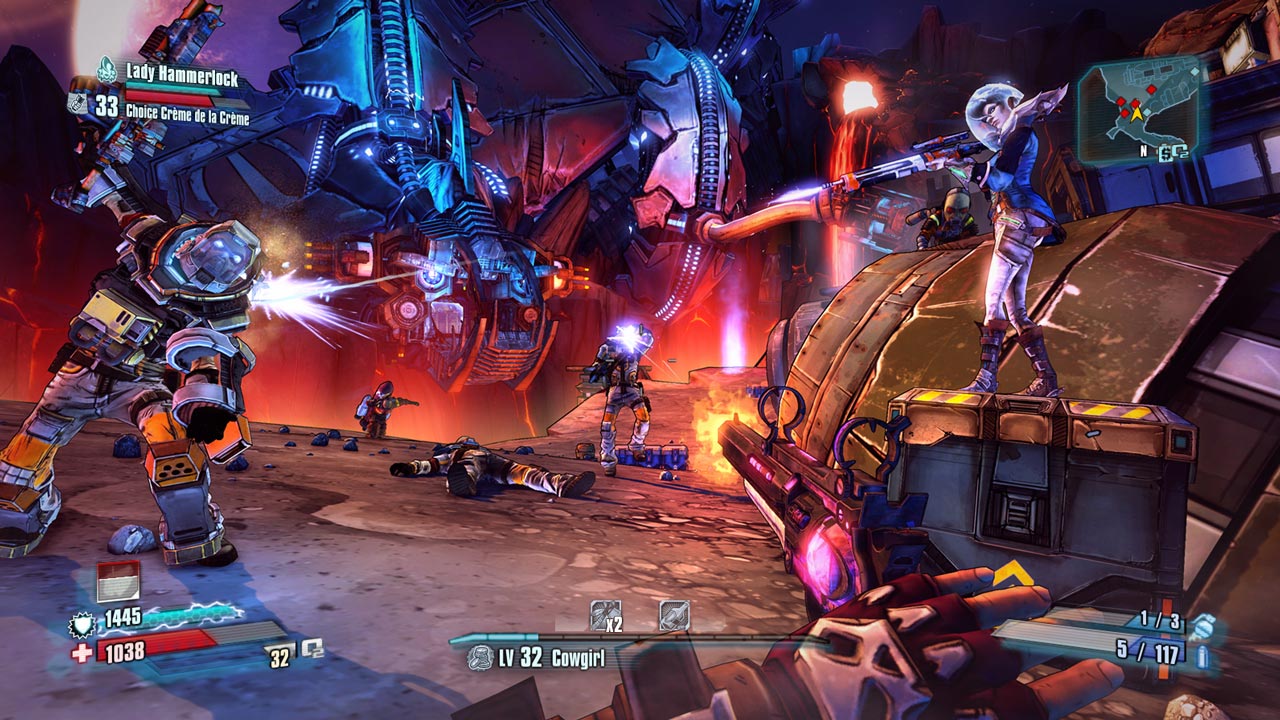 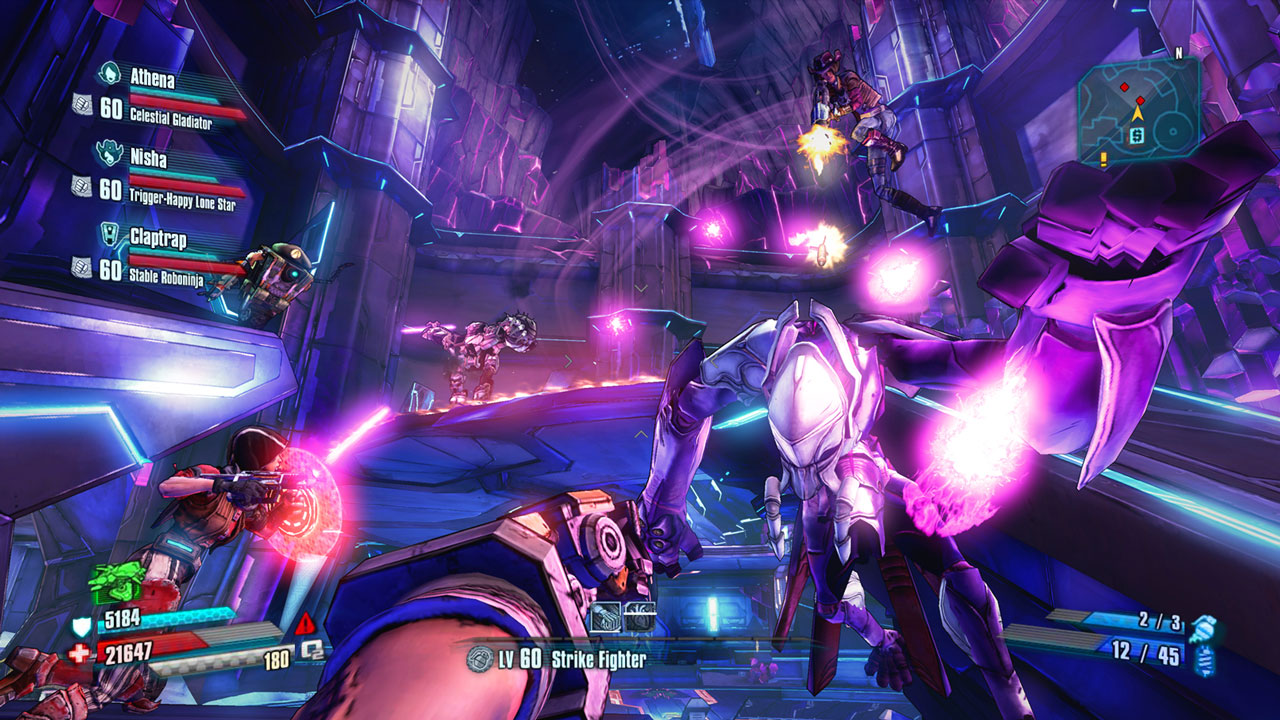 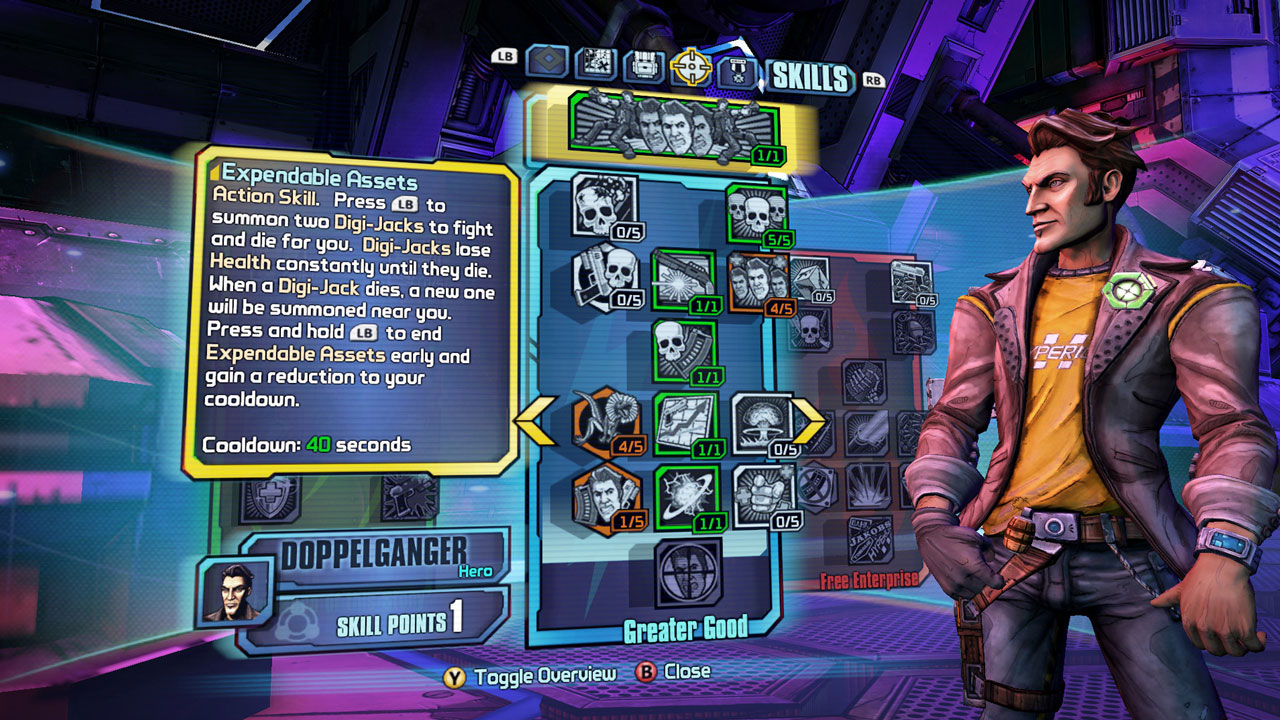 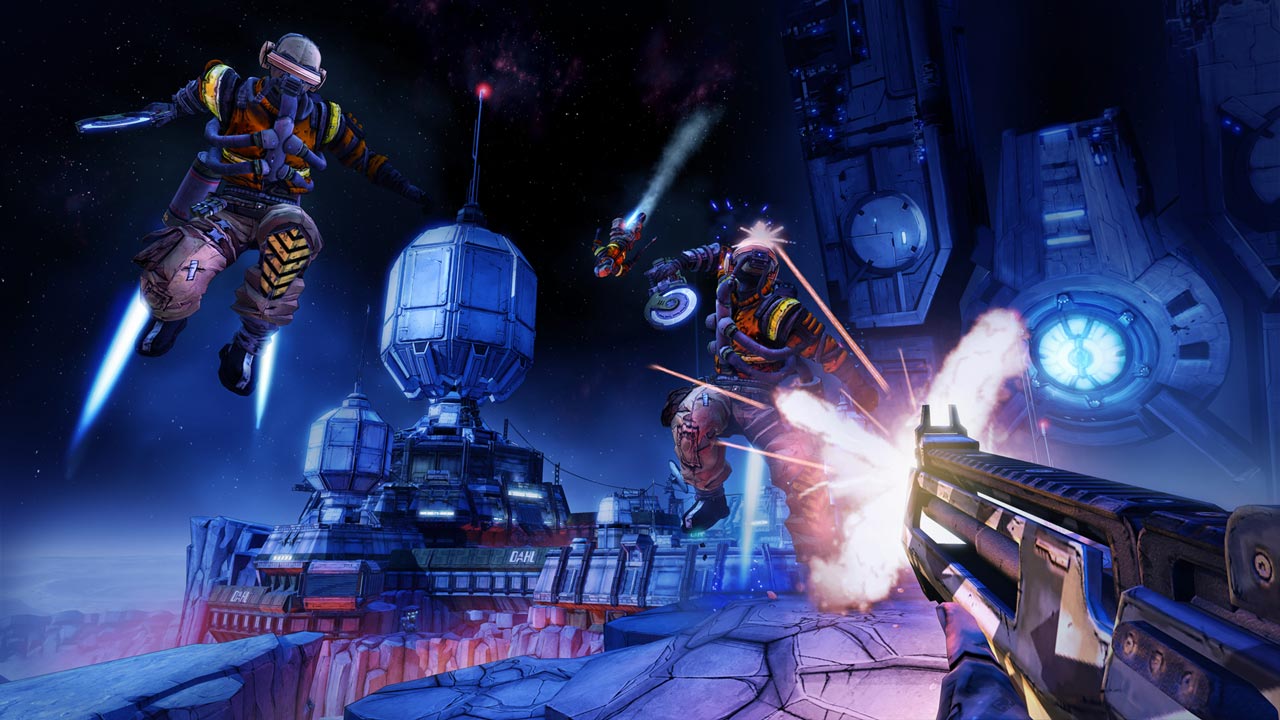 
Borderlands: The Pre-Sequel
Uncover all the secrets and secrets of the main villain Borderlands 2 Handsome Jack along with new playable characters, including the robot Claptrap and other iconic villains of the series. The Pre-Sequel will give players a completely new gaming experience based on a proprietary blend of action and role-playing game elements that players love so much. Jump in conditions of low gravity and shoot enemies in the air from brand-new “ice” and laser guns. Hop on a board of new technology and explore the lunar landscapes. So grab a friend (or two, or three), buckle up to the rocket and go on a completely new adventure in the world of Borderlands!
• Find out how the Borderlands main scoundrel began, and become a witness to his atrocities.
• Fight and move in low gravity conditions. Shoot from the newest ice and laser weapons. Show the space bandits who´s in charge
• Try out four new classes of characters. You are greeted by thug Wilhelm, the lawyer of Nis, the gladiator Athena and the prototype Fragus robot, specially modified for combat operations. Welcome to the Handsome Jack team!

Borderlands: The Pre-Sequel Season Pass
Extend the madness with the help of Borderlands: The Pre-Sequel Season Pass, which includes new characters, new challenges, quests, and more:
• Set "Handsome Jack Jack"
Play as a universal pet - a beginner tyrant maniac ... well, or at least his double. Set "Handsome Jack" will allow you to use an attractive appearance as a weapon, confusing and subjugating enemies
• Addition “The Greatest Seeker of the Vault”: The Holo-Dome Massacre
In this expansion, the seekers of the Vault Exton and Gage find themselves at the same point of the narration as other heroes, and get to the “Holodu-Dome” massacre, a new arena where players have to beat back impressive waves of enemies and bosses, as well as earn a new cool weapons, equipment, heads and suits
• As a bonus, there is a set of updates to the “Greatest Seeker of the Vault”, in which, as the maximum level increases, the player’s characters receive 10 new levels and the opportunity to earn 10 more skill points
• Set of "Baroness Lady Hammerlock"
Meet Sir Hammerlock´s sister, Baroness Aurelia. She is as cold as ice ... literally: her “Frost Frost” skill does a lot of cold damage to the inhabitants of Elpis. She can turn any co-game partner into her servant using the Negotiated Aristocracy skill tree.
• Addition "The greatest seeker of Storage 2": a fantastic journey, or visiting Zhelezyaki
In this supplement, Jack digitizes the repository seekers and sends them to the mind of the piece of iron. Their task is to find the mysterious code, get out of the head of the robot and at the same time manage to not go mad! Our anti-heroes will have to fight against the viruses of the piece of iron and the digital embodiment of the loneliness tormenting him! The maximum level in this set is increased by another 10

1. You need to download and install Steam http://steampowered.com/download/SteamInstall.msi (if not already installed)
2. Start the Steam client
3. Create a new account on Steam or go to an existing one
4. Go to the "Games" section and select "Activate on Steam"
5. Enter your purchased activation key