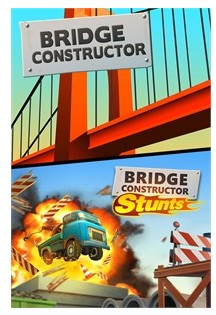 Sold: 0
Uploaded: 22.01.2021
Content: Cod4.txt 0,68 kB
Loyalty discount! If the total amount of your purchases from the seller slonimus more than:
If you want to know your discount rate, please provide your email:

Bridge Constructor
Become an appraised bridge engineer and architect in Bridge Constructor. Create and design your own constructions and watch the cars and trucks pass over them - or see them fall and crash while your inferior creations collapse due to weight and the laws of physics! Progress through numerous levels and build bridges over deep valleys, canals, or rivers. Stress tests reveal whether the bridge you build can withstand the daily stress of continual use from cars and trucks.
FEATURES:
- 64 Levels
- 6 Settings: City, Canyon, Beach, Mountains, Hills, Grotto
- Option to build sloping roads
- Map with all unlocked worlds/levels
- 4 different building materials: Wood, Steel, Cables, Concrete pillars

Bridge Constructor Stunts
Stuntman and engineer in one? No problem with Bridge Constructor Stunts!
Build imposing ramps and loops to reach your goal in the diverse stages. But building structures alone isn´t enough this time: you sit behind the wheel of the vehicles yourself and have to maneuver them skillfully to the goal. Collect stars, complete daredevil jumps, flips and spectacular stunts, leaving behind a trail of destruction across the entire level to beat the high score. But you can only do all that with perfectly constructed bridges and ramps.
FEATURES:
- The latest instalment in the internationally successful Bridge Constructor series!
- Improved and simplified Construction Mode
- Build ramps and drive vehicles across them yourself
- Diverse level with different objectives: collect stars, score target, reach the goal…
- Delivery vans and dump trucks with cargo that wreaks havoc when coming loose, but is also useful to help you collect items