Call of Duty Ghosts Russian version for the Xbox 360 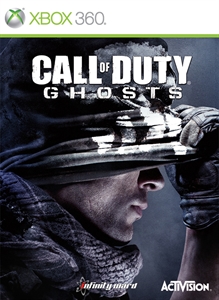 Uploaded: 01.05.2020
Content: text 653 symbols
Loyalty discount! If the total amount of your purchases from the seller AN Sale Games more than:
If you want to know your discount rate, please provide your email:

They can not be broken. The legendary series of first-person shooter, which has become one of the most popular gaming lines all over the world, ready to make a breakthrough to this perfection! In the new game Call of Duty: Ghosts you will not fight for the sake of patriotism, liberty, or the triumph of democracy. You will find a fierce battle for survival.At the heart of this universe Call of Duty® engine is the new generation, providing an incredible level of immersion and performance and is able to display 60 frames per second on all platforms, thus providing a smooth image. Campaign Ten years after a global cataclysm former influence one of the leading world powers dissipated like smoke. In this harsh reality, an elite unit of soldiers "Ghost" to challenge the new global force, equipped with the latest technology and claims to world domination. Multiplayer With the updated engine Call of Duty®: Ghosts change your ideas about modes of multiplayer games. The dynamically changing maps you will encounter earthquakes, floods and other events that could most decisive impact on the tactics and strategy of combat. And the advanced character editor allows players to create a truly unique fighters. And this is only a small part of the changes that await you in the multiplayer Call of Duty®: Ghosts. Create your squads and squad, slide up to 6 fighters in the battle in the new regime troops. This mode combines hand-being online play and you can play alone or together with the soldiers that you have created and pumped into the multiplayer.

The connection between the console: 1 - 2

Related to item "Call of Duty Ghosts Russian version for the Xbox 360":