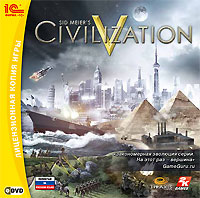 For more than twenty years a series of Civilization worldwide has sold over nine million copies of the game, which makes it the greatest global strategy of our time. The fifth incarnation of the legendary "Civilization" takes on a new level of quality: opportunities and development options greatly increased, the opponents have become smarter, network game - interesting and varied, and the graphics - beautiful.

To hold his nation through the ages - from primitive society to a high-tech civilization, to survive the "golden age" and stand at the origins of world religions, to reinvent the wheel, and a nuclear reactor, built the Pyramids and the Statue of Liberty, to meet with the greatest political leaders, to prove himself as a diplomat or a strategist - all this is possible in Sid Meier's Civilization V.

The fifth game will offer fans of the famous series of strategies to lead one of the eighteen nations and lead it through the centuries - from the stone age to the space age, to make the most powerful in the world.

Sid Meier's Civilization V is different from its predecessors better graphics, extended diplomatic options and new combat system. Now armed clash with the enemy - is not just a battle between the two units. Players will be able to massively attack the enemy in different directions and maintain basic forces bombing from the rear. There is also a convinced pacifist free hand: they open the path of diplomacy, which is often more effective than armed aggression.

In addition, we have retained and significantly improved the multiplayer mode. It is to him the previous games in the series to a large extent owe their popularity. In Civilization V players from around the world will be able to not only compete with each other, but also to share scenarios, compare results, to demonstrate their achievements, as well as just talk and visit related sites, without leaving the game.
\u003cdelivery\u003e The original copy of the key, the license agreement and all copies of the software in its original packaging, you can get a convenient way for you. To do this, after the payment and receipt of the digital copy of the key, please contact us by email or phone. Postage and packing, as well as courier services are paid separately by you. \u003c/delivery\u003e

Activation of the game:
1. You need to download and install Steam http://steampowered.com/download/SteamInstall.msi (if not already installed).
2. Register your account on Steam (if it does not).
3. Select "My Games", click "Activate game", enter the acquired key in the box that appears for entering the key.
4. Prepare the installation process (download) - about 45 minutes (depending on your internet channel time can vary greatly from the specified).