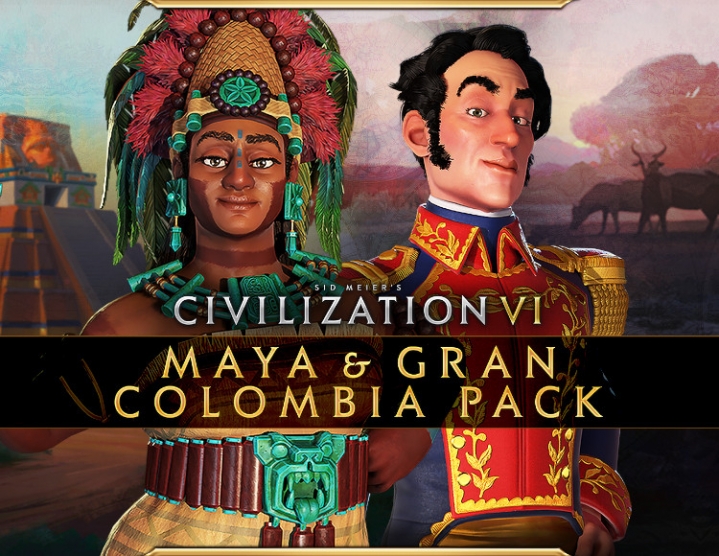 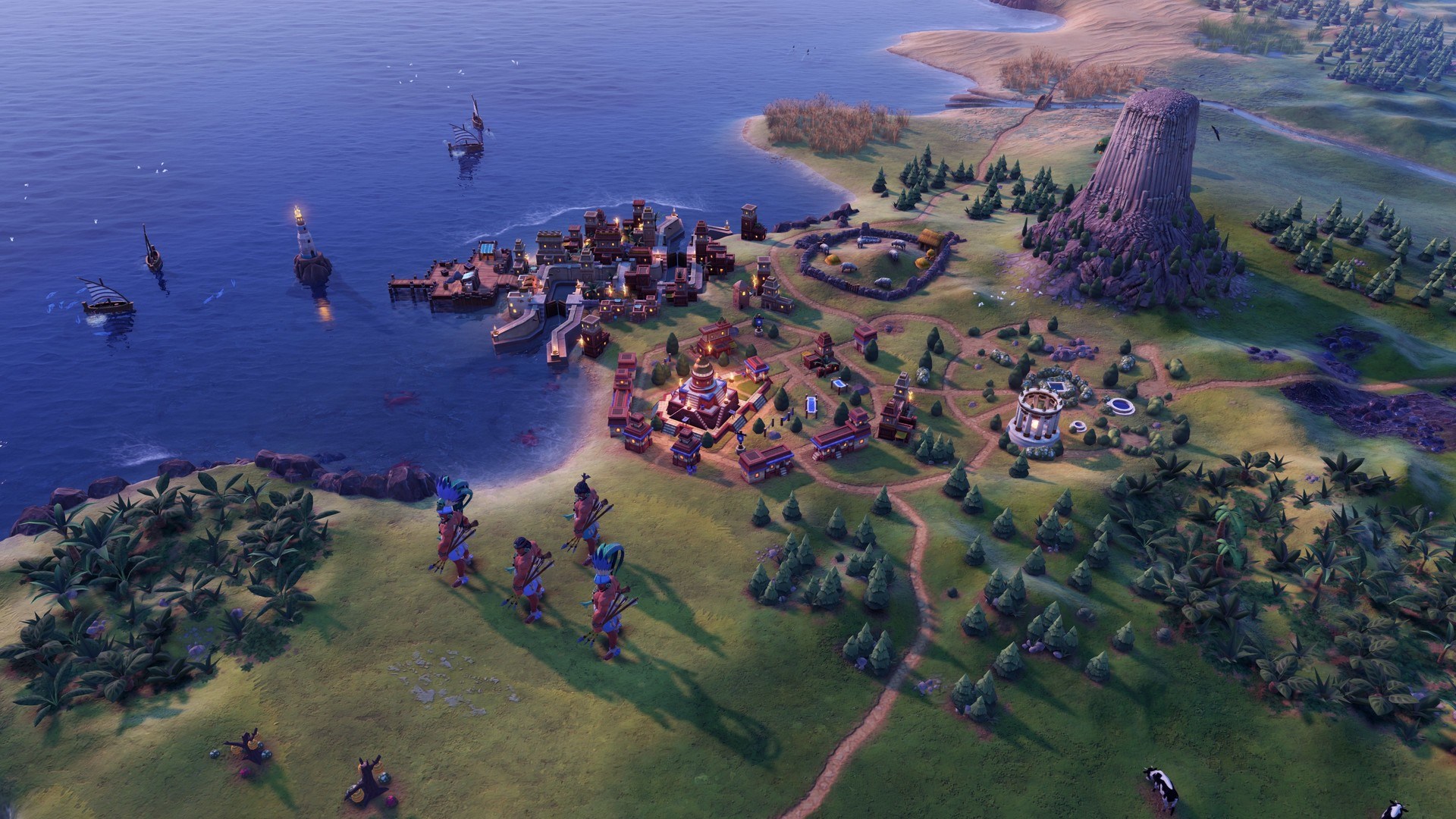 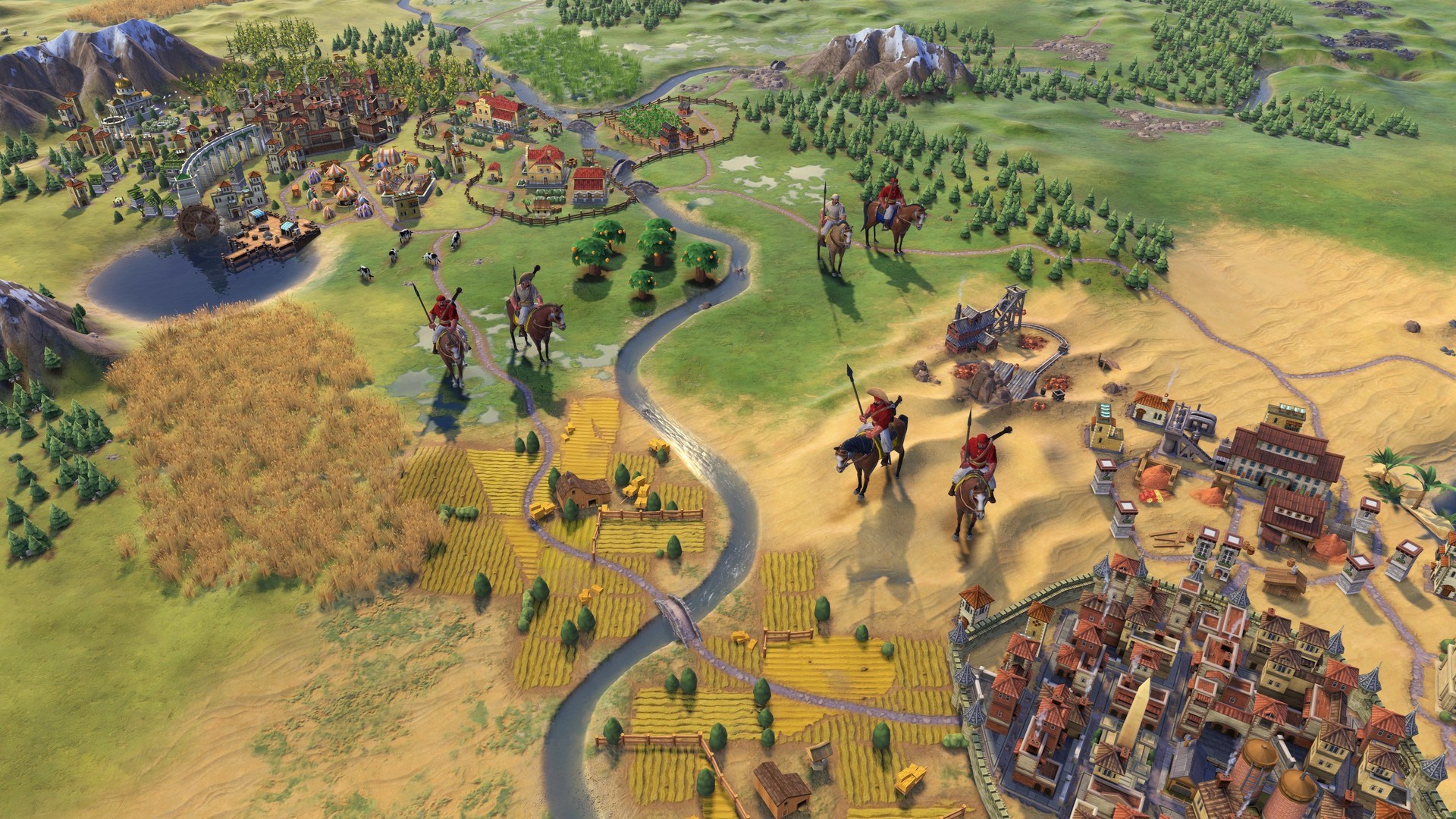 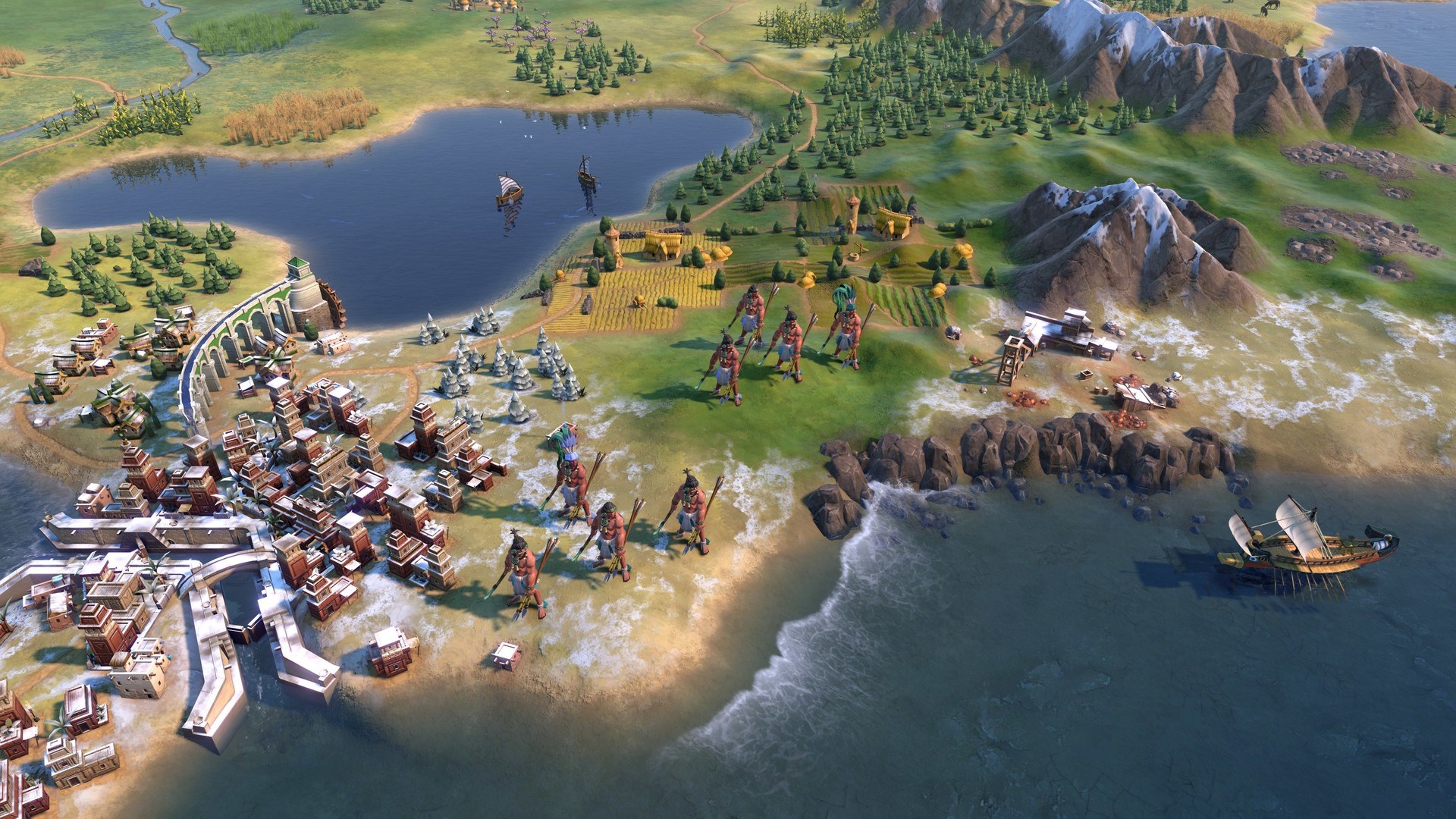 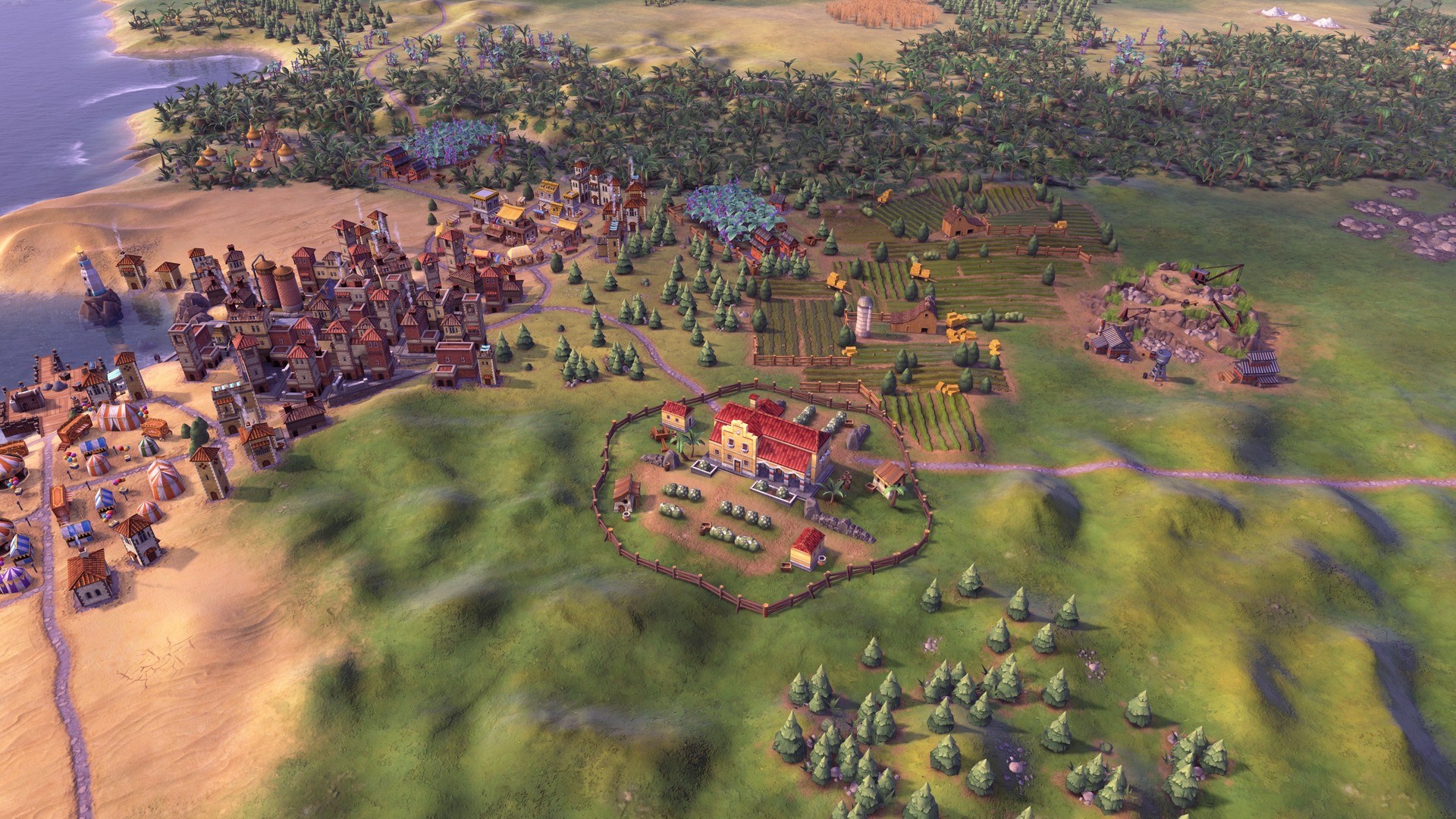 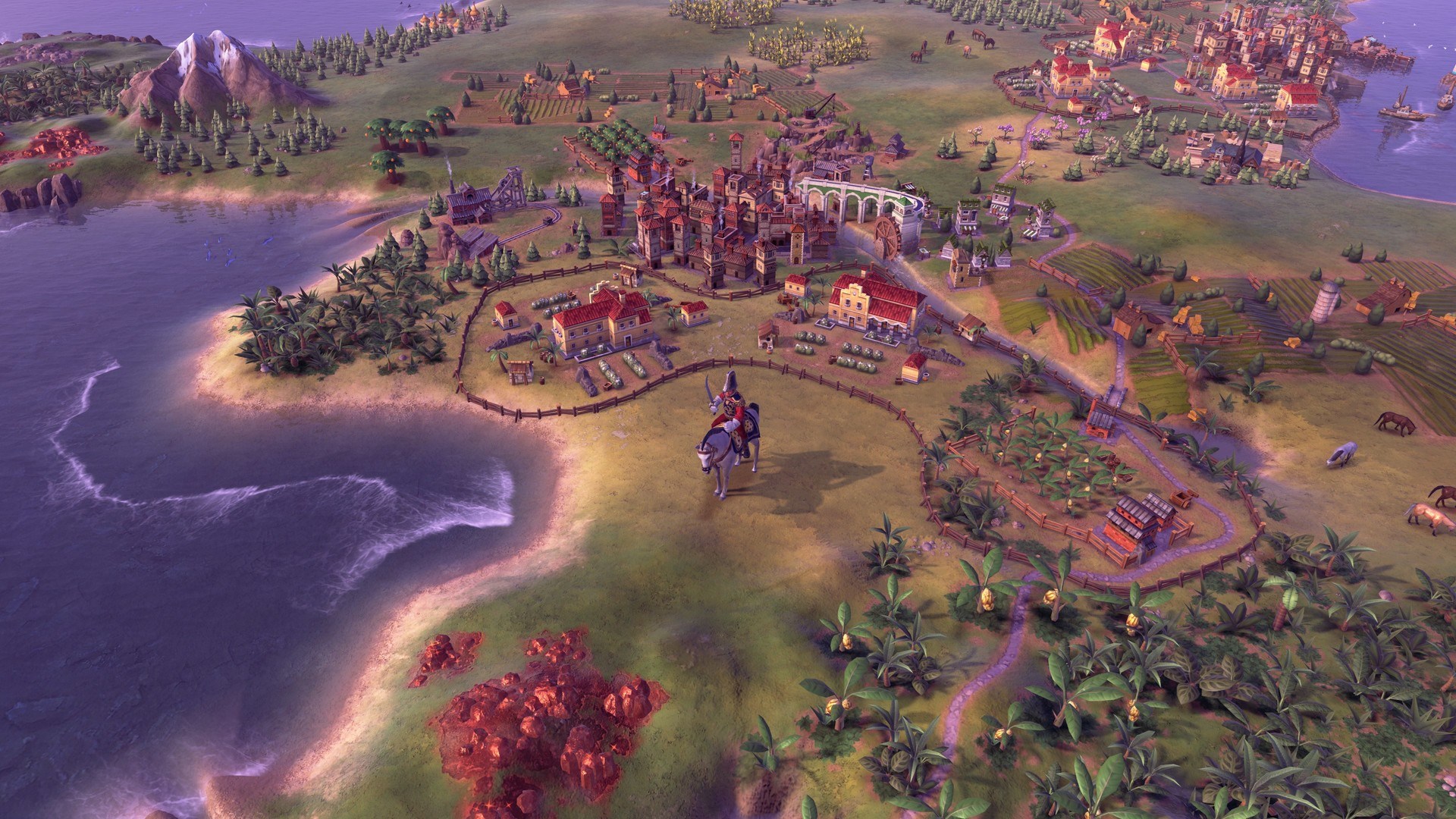 Description:
Additional content requires Sid Meier´s Civilization® VI to be installed.
This content pack adds the Mayan Lady of the Sixth Heaven and Simón Bolivar, the leader of Greater Colombia, to the game. Maya already in the early stages of the game can build prosperous cities surrounded by farms and plantations. These cities are protected by unique h´ulche warriors. Greater Colombia relies on highly mobile armies led by the talented commander generals of Simón Bolivar. It includes the Mayan civilization with the Lady of the Sixth Heaven, a unique h’ulche unit and a unique observatory area.
Civ Unique Ability: The Mayab ability grants the Maya bonuses to housing and production from farms, as well as a bonus to contentment for rare resources in the vicinity of the city center. City construction near the coast of silt
and fresh water does not give bonuses to housing.
Leader´s Unique Ability: The Lady of the Sixth Heaven possesses the Ish-Mutal-Ahav ability, thanks to which the Mayans within 6 cells from the capital receive bonuses to performance in other cities, and their units receive combat bonuses.
Unique Unit: H´ulche, a more powerful alternative to the archer. H´ulche receive a bonus to combat strength when they attack a wounded enemy.
Unique Area: The observatory replacing the Mayan campus grants a minor bonus for being close to farms and a significant bonus for being close to plantations.
Also includes Greater Colombia with Simon Bolivar, unique units (llanero and commander generals) and a unique upgrade - hacienda.
Civilization Unique Ability: The Ehercito Patriot ability gives all Greater Columbia units additional movement points. Raising a unit does not end its turn.
Leader Unique Ability: Simon Bolivar has the Campania Admirable ability, which gives Greater Colombia a Commander General whenever it enters a new era.
Unique Units: Greater Columbia has two unique units: - The Commander General is a great general with special abilities, including passive and retirement abilities.
- Llanero replace the Great Colombian cavalrymen. They are cheaper to upkeep, receive a combat bonus for each Llanero in the neighborhood, and are healed completely if a nearby commander general activates his ability.
Unique Improvement: Hacienda grants bonuses to production, gold and housing, as well as a bonus to food for each plantation in the neighborhood.
New Game Mode "Apocalypse" (requires Gathering Storm DLC)
Adds new natural disasters to all games: forest fires and meteor showers.
Additional game mode with special rules: New natural disasters: comet impact and solar flares.
Existing natural disasters are more dangerous.
New military support unit: a fortuneteller capable of causing natural disasters at the player´s command.
New competition: the sacrifice of units in the vents of volcanoes. A fortuneteller is required for the sacrifice - he uses his unique ability on allied units near the volcano.
When climate change reaches its climax, an apocalyptic scenario unfolds on the planet.
New resources: Honey. A rare resource.
Maize. Bonus.
New Wonders of Nature: The Bermuda Triangle. Crossing it, naval units gain additional movement points and teleport to another area of ​​the ocean.
Paititi. Bonus to gold from trade routes in the city that controls it. Significant neighborhood bonus for commercial centers and theaters.
Fountain of youth. Increases the health of units passing through it.
New city-states: Caguana. Cultural. Overlord´s bonus: access to the Batey upgrade, which increases culture depending on its location.
Singapore. Industrial. Overlord Bonus: Production bonus for each trade route that goes abroad.
Lahore. Military. Overlord