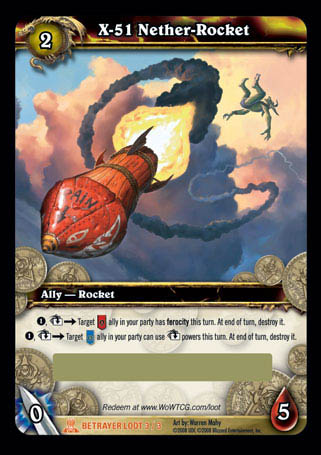 SUPERIC information about the seller and his items
offlineAsk a question

Buying code, you must tell the server and region games operator to activate the primary code. After giving the code you get after purchase, we will activate the code for a X-51 Nether-Rocket on the page

to verify the code and ensure that the code is new.

After that, we will give you a code that you must give in Booty Bay goblin that you will buy, and X-51 Nether-Rocket.

After purchasing this product, code for a goblin in Booty Bay you will get within 24 hours, often much faster this time, and depends on whether the operator of the computer, if the operator is online, you will receive a code for 5 minutes.

Some mounts we pass trades, if you prinitsipialen code, not the mount, please beforehand inquiry from the seller of a code.

Remember that the code can only be activated for a single server and a single player. So be careful when choosing a server and the character that you want to play and activate the code on the X-51 Nether-Rocket.

Contact the seller you can on the contacts that are in the information about the seller.