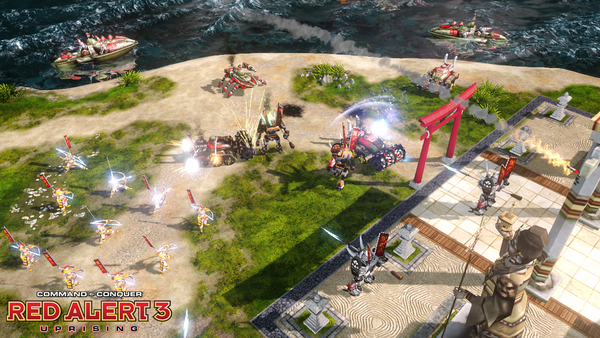 Uploaded: 16.06.2020
Content: text 24 symbols
Loyalty discount! If the total amount of your purchases from the seller _Diesel_ more than:
If you want to know your discount rate, please provide your email:

Immediately after payment you will receive a key to activate the game on Origin.
After activation the game will be permanently associated with your Origin account.


Notice: Does not require the original Command & Conquer 3 Red Alert to play

Red Alert 3: Uprising features four new mini-campaigns, giving players a deeper dive into the storyline´s of the Soviets, the Allies, the Empire of the Rising Sun and a unique campaign centered on the origins of everyone’s favorite psionic Japanese schoolgirl commando, Yuriko Omega. Set in the aftermath of Red Alert 3, the Soviet Union is still reeling from its crushing defeat. The Empire of the Rising Sun is desperately trying to regain both honor and identity, and the seemingly victorious Allies find themselves in the midst of corruption and deceit within their own ranks.

How will the defeated Soviets react to the occupation and the presence of FutureTech, the mysterious company contracted by the Allies to develop new technologies in the Soviets’ homeland? How will the humiliated Empire of the Rising Sun rise up and defend itself against the former Soviet commanders who have invaded their territory in a post-war land grab? How will the Allied occupational forces quash the uprising of the former Imperial commanders? And who is the mysterious Japanese commando Yuriko Omega?

Activation Details:
1. Download and install Origin Client https://www.origin.com/usa/en-us/store/download (if you don´t already have Origin Client);
2. Create your Origin Account or log into an existing one;
3. Click on the ´Origin´ in the menu bar on the top left;
4. Select Redeem Product Code...;
5. Follow the onscreen instructions to complete the process;
5. After activation the game will appear in the list of games and you can download it from Origin, and then start playing.