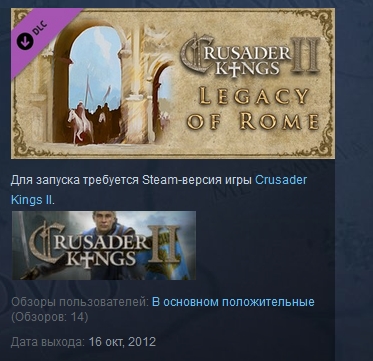 The second expansion for the critically praised strategy-RPG Crusader Kings II focuses on the Byzantine Empire. In the rich political world of Byzantium, the vassals have been scheming. They have split into factions and they are banding together to revolt against your rule.

Legacy of Rome contains a wealth of new features to outsmart them and maintain your empire. The finals breaths of the Roman Empire are in your hands!

Crusader Kings II explores one of the defining periods of world history in an experience crafted by Paradox Development Studio, the masters of Grand Strategy. Medieval Europe is brought to life in this epic game of knights, schemes, and thrones.
Key Features:

Explore the Intricate Faction System: Join a faction to put pressure on your liege and to keep track of factions in your own realm
Raise Standing Armies: You will now be able to use retinues to have standing armies in your domain. The size is determined by technology
Experience Factional Revolts: No more easily defeated rebellions. Disgruntled vassals will now band together in revolt against your rule
Appoint Orthodox Patriarchs: Orthodox kingdoms and empires can now control their own heads of religion instead of being dependent on the patriarch of Constantinople
Streamlined Mobilization: You will always raise a single, larger levy from your direct vassal; no need to worry about the opinions of the lower vassals
Leader Focus: Appoint your generals wisely, their traits & skills are now of vital importance on the field of battle. More commander traits are now added to increase the importance of your choice of military leaders
Explore Byzantine Events & Decisions: Legacy of Rome includes many specific events & decisions to make the Byzantine Empire come alive
Improve Your Ruler: You can now actively strive to improve your skills or traits through the new Self Improvement Ambitions