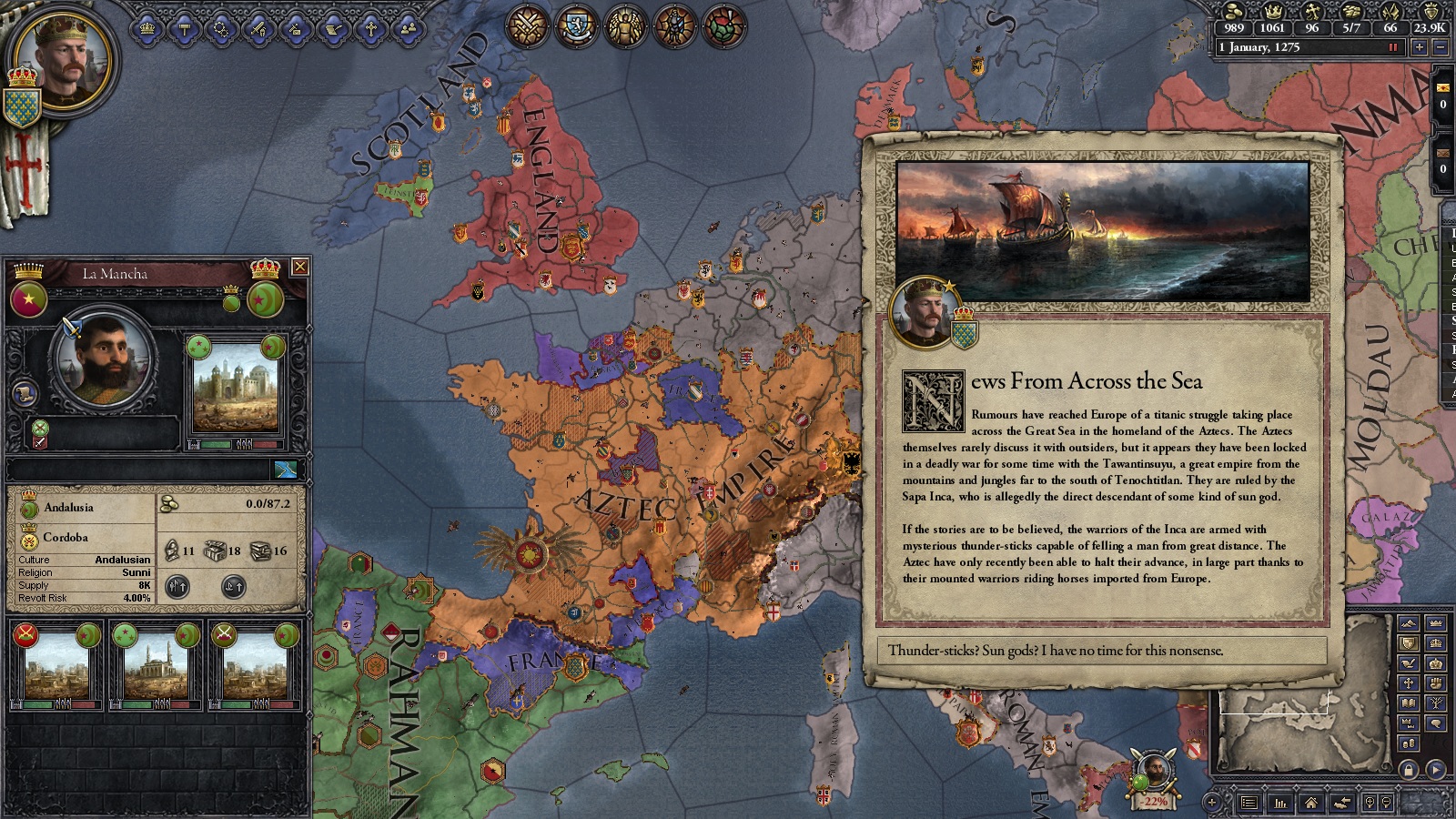 Doxxy information about the seller and his items
offlineAsk a question

This is the end of the 13th century, and Europe still has not recovered from the conquering Mongol hordes.
As the Lords of the West breathed a sigh of relief, another threat loomed on the horizon.
Strange ships with winged snakes and grinning skulls - symbols that previously were not in the known world, were seen along the entire Atlantic coast.

When the sun sets on the shores of Morocco, Portugal and Ireland, the largest fleet that has ever risen, approaching the land, is ready to invade in the name of the bloodthirsty gods ...

Crusader Kings II: Sunset Invasion is the third DLC extension for the critically-rated Crusader Kings II strategy / RPG.
This fantastic scenario marks the first Paradox Development Studios departure from history.
Hearing about Europe from traveling northerners, the Aztec blood-stained civilization rose early and now spreads like a poisonous plague. Get ready to defend all that is dear to you from the Sunset Invasion!
Crusader Kings II explores one of the defining periods in world history on the experience created by Paradox Development Studio, the masters of Grand Strategy. Medieval Europe comes to life in this epic game about knights, schemes and thrones.

Main characteristics
A new threat of invasion arrives at a random point in the middle or end of the game.
Unique new portraits, shields on the map and units for the great Mesoamerican menace
Battles in fear of the Aztec gods: the new Aztec culture and religion of Human Sacrifice!
When a province is lost, no one is safe from the threat of losing their hearts on the obsidian altars.
Survive the terrible disease brought by pagan oppressors, with a new plague from across the ocean.

1. You need to download and install Steam https://store.steampowered.com/about/
2. Log in to your account or register a new one.
3. Go to the "My Games" section and select "Activate via Steam ...", and enter the key received after payment.
4. After activation, the game will appear in the list of games (Library) and you can download it

✅ Dead by Daylight: The Halloween XBOX ONE Key 🔑

Through the Darkest of Times (Steam key) - - RU