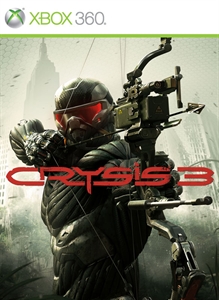 Uploaded: 24.07.2020
Content: text 663 symbols
Loyalty discount! If the total amount of your purchases from the seller AN Sale Games more than:
If you want to know your discount rate, please provide your email:

Awarded numerous awards, Crytek returns again with Crysis 3, the first shooter of 2013! Return to the battle in the role of the Prophet, a soldier in a nanosuit, who must discover his earthly origin and carry out cruel revenge. Adapt the process to new security options for your unique nanosuit, making your way through the seven wonders of the Liberty Dome. Wake up the fierce power of a new, high-tech bow and alien weapons to fight earthlings and aliens. Discover the horrible truth about the death of your team, following the story, full of intrigue and unexpected turns. Crysis 3 is a unique shooter implemented in stunning graphics that only Crytek and the latest version of CryENGINE can provide. Access, Adaptation and Attack - since spring 2013

Seven miracles.
New York, covered with a huge dome, turned into a real urban jungle. Get familiar in the seven districts and turn them into their hunting grounds.
Assess the situation, adapt and attack.
New open levels and an improved nanosuit await you, giving players even more freedom. Act covertly or go ahead - only you decide how to act.
Improved multiplayer.
Experiment with equipment nanosuit and enjoy the new game modes.
The most deadly arsenal in the history of the series.
In addition to the powerful terrestrial means of destruction in Crysis 3 you will find alien trophy weapons and a magnificent bow.
Evolution of CryENGINE.
An improved version of the engine CryENGINE allows you to embody all the ideas of the creative team of Crytek and create a luxurious graphics and exciting gameplay.