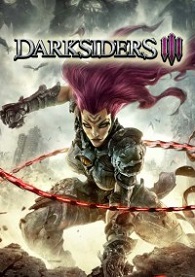 Uploaded: 08.08.2020
Content: text 17 symbols
Loyalty discount! If the total amount of your purchases from the seller SOFT-KLUB more than:
If you want to know your discount rate, please provide your email:

COMPOSITION OF THE EDITION:
- Game Darksiders III
- 2 DLC (DLC will be released after the release of the game)
- Digital soundtrack


In Darksiders III, you will return to Earth in the role of FURY, which intends to find and destroy the Seven Deadly Sins. Darksiders III is the long-awaited third chapter of the popular Darksiders series.

GAME FEATURES:
- Become FURY - a magician who fights to restore the balance of power on Earth with the help of spells and whips!
- Master various forms of magic.
- Explore a world full of secrets.
- Defeat the Seven Deadly Sins and their servants, among whom will meet both mystical creatures and real monsters.
- You will find the familiar Darksiders style: the post-apocalyptic Earth, the peaks of Heaven and the depths of Hell, destroyed by war, decay and the tread of nature