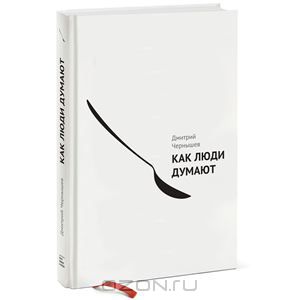 brotherMCK information about the seller and his items
offlineAsk a question

If you are unhappy with a product you purchased, the seller will return your money within 3 days from the moment of purchase.

From the producer
What is the book about
Looking at the spoon on the cover, first you might think that this gastronomic publication. And actually, it is. Because under the cover - food for thought.
People do not think much of the "ordinary". Everyday is done automatically, surrounding perceived edge of consciousness and intellectual activity, at best, about the work. As a result, the creative principle in man may die out if not fed from the outside. With many it is happening. And nourish it from the outside you can only thinking.
Perhaps only children and foreigners are able to make us their questions really think about the simple things. And yet - such books that make rediscover the world. Where on every page - unusual facts, puzzles, stories, riddles and stories, "normal" things and actions, seen through the prism of another mentality.

Chips Books
The project is entirely the author's.
The book was published in the "people's money": so that it came out, hundreds of people have contributed.

For whom this book
For those who have an urgent need to shake up his own mind and go beyond stereotypes.
For those who do not care whether our children to think for yourself or someone will think of them.

From the author
I want desacralized process of creative thinking. Show that it consists of a set of simple and clear algorithms, which anyone can learn. When you were little, and gave the wrong answer, perhaps, the parents said to you: "And if you think?". The word "think" they spoke, but that's what it actually means - not explained. I want to follow the advice of Einstein ("Everything should be simplified as far as possible, but no more"), to try to explain - what it means to "think".
I tried to come up with an alphabet of thought. It seems to me that this can simplify how inventing something new, and an explanation of how people came to this or that idea. Besides, the idea expressed graphically stored much better. And, perhaps, the creation of the alphabet thinking allows refute Ludwig Wittgenstein, who believed that the limits of our language mean the limits of our world. Maybe the first alphabet will allow to make do mental operations, and only then find the result obtained verbal equivalent.

Access to the constructor JimdoBusiness: everything is already included.