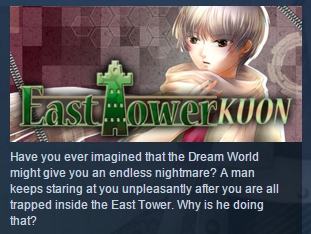 East Tower is a romance mystery visual novel with romancable guys, which has a lot of comedy scenes.
We suggest you to play based on this order: Akio - Takashi - Kuon - Kurenai.
In East Tower - Kuon, you´ll be partnered with Kuon who keeps worrying about everything around him.

STORY
Sakuya Morita (name is changeable) was given a chance to try the latest virtual game attraction, East Tower. Within the game, players can transform into whatever they want to. Sakuya chose to transform into a man. She was excited at first, but then a sudden accident happened and she was trapped with four other men. Later, they decided to partner up and proceed to beat the game in pairs, hoping that it would be the way out.

The man who seems to be the eldest amongst them keeps staring at Sakuya. He instantly rejects Sakuya´s offer to be her partner, though later they have no choice but to team up together. He seems to know much about the attraction and about Sakuya herself, but he doesn´t explain anything to her.

What does he hide from her?
And then their adventure comes closer to the secret of the East Tower...