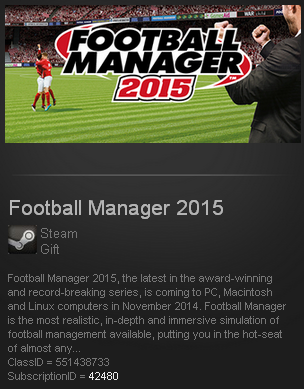 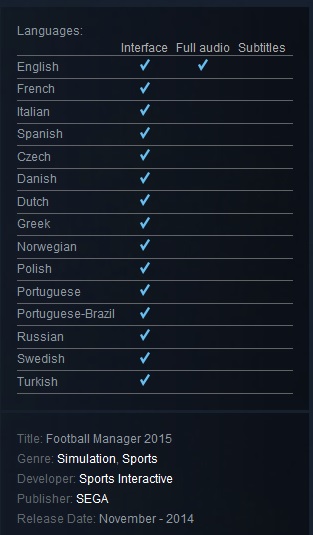 * This is a Russian version of the game and we are NOT responsible for regional or any other restrictions!

Football Manager 2015, the latest in the award-winning and record-breaking series, is coming to PC, Macintosh and Linux computers in November 2014.


Football Manager is the most realistic, in-depth and immersive simulation of football management available, putting you in the hot-seat of almost any club in more than 50 countries across the world, including all of Europe´s biggest leagues.


Football Manager 2015 will allow you to live the life of a real football manager - you decide who plays and who sits on the bench, you´re in total control of tactics, team-talks, substitutions and pitch-side instructions as you follow the match live with the acclaimed 3D match engine.


A whole host of new features will be announced from October 2014 onwards - keep an eye on http://www.footballmanager.com for updates.


Pre-order Football Manager 2015 now to enjoy access to a fully-playable ´Beta´ version of the game roughly two weeks prior to the official release date.