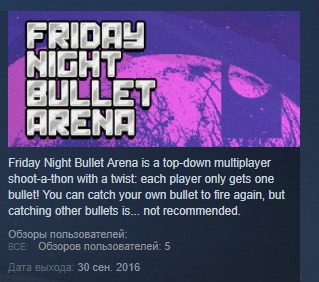 Friday Night Bullet Arena is a top-down, bullet-bouncin´, shoot-a-thon with a twist or twelve. Outmaneuver your friends atop strange topologies to secure ultimate space victory!
Key Features:
Local Multi-player (2-4 players)
Play with keyboard or game pads! you will need at least 2 game pads for 4-player play
10 characters to boop! and bop! with
10 different worlds, each with different scenery and stage hazards
250+ different levels!

What´s going on up there?
One Bullet:
That´s right one bullet. Only one dang bullet. If you shoot it, you´re going to have to catch it again. Catching bullets sound pretty dang hard? Well don´t worry, because Friday Night Bullet Arena features...

Super Screen-wrap Action TM:
You´ll never lose your precious missile because when it leaves the screen, it just comes popping right back in on the other side! Catch your bullet again in order to fire at your foes once more. You know what they say: "If you love something let it go, and hope that it destroys all of your friends."
- Screen-wrap Action isn´t actually trademarked :(

Probably don´t bump into the other player´s bullets though