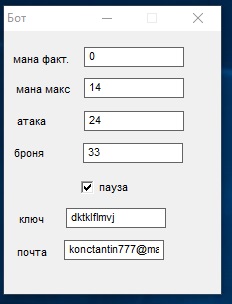 konstantin777 information about the seller and his items
offlineAsk a question

Bot cheat for pvp in general mode. The mana of the lower unit is sought; it becomes complete; the skill is used. At the end of the battle begins a new one. You can run in pvp rated, BUT! Banyat 100%. You can also run in the underworld, raids, towers, pets, etc.
Optimal in pvp overall. Down is better to put the weapon key. He attacks the target without additional target designation and occasionally loses, less chance of a ban.

Launch the game in the incentive with a resolution of 1280 * 720. The game settings: animation, the maximum.
Bot:
mana fact how much mana hero has now
mana max - how much mana is needed for a skill
attack- attack hero
his armor is his armor ..