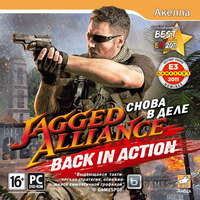 Uploaded: 02.10.2019
Content: text 57 symbols
Loyalty discount! If the total amount of your purchases from the seller GameMarket more than:
If you want to know your discount rate, please provide your email:

Dear buyers, after payment you receive an activation key, the game Jagged Alliance: Back in Action in the Steam (the official release date of the game and start the activation February 9, 2012).


The ruthless dictator has seized power in the island nation Arulco. Exiled President appeals to you to recruit a detachment of professional mercenaries to restore him as leader of the country. Grab Island sector by sector, control of the mine and mining fortified camp. Team up with local insurgents, trained and armed them. Train your soldiers, to supply them with the latest weapons, do not forget to pay them under contract and over again the sun rises Arulco Liberty.


• A remake of the legendary cult game Jagged Alliance

• An unrivaled combination of military strategy and tactical RPG

• An innovative combat system, which includes a step by step planning and battle in real time

• Modern war with an impressive arsenal of realistic weapons

• Simultaneous control of several units on the strategic map

• Over 60 unique mercenaries, ready to fight for you


\u003cdelivery\u003e Immediately after payment you get officially distributed in Russia by Akella digital product activation keys. No scans, photos or disks you do not need! Fully licensed product \u003c/delivery\u003e

1. When purchasing be sure to include your email address in a specially designated place

2. Be positive feedback (indicate email is not recommended, since it is possible to receive even more spam)

3. Within 48 hours you will receive to your email a photo gift (guest key for Diablo 3 or Starcraft 3)

Activation of the game Jagged Alliance: Back in Action in the Steam:

1. You need to download and install Steam - http://steampowered.com/download/SteamInstall.msi (if not already installed)

3. Go to the "My Games" and select "Activate via Steam ...", read and agree to the Steam Subscriber Agreement and enter the key received after payment

4. After activating the key game will appear in the game and you can download it through Steam. The installation process (download) takes about 15-50 minutes (depending on your internet channel)

Jagged Alliance - Back in Action SS