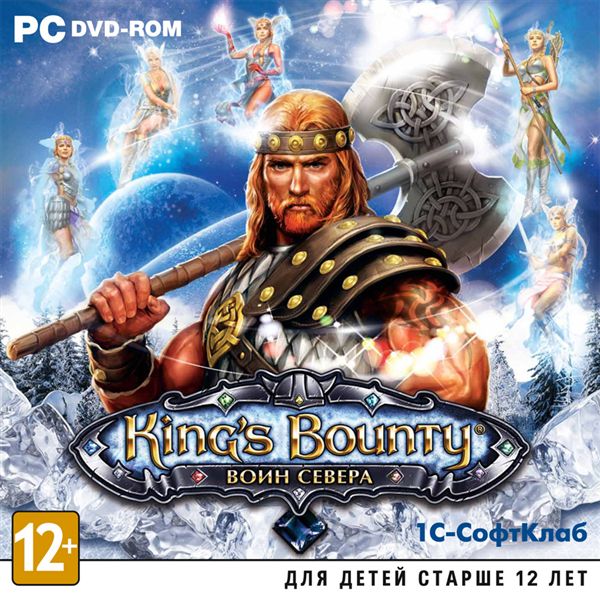 Uploaded: 13.10.2014
Content: 116.JPG 20,28 kB
Loyalty discount! If the total amount of your purchases from the seller Nickcd more than:
If you want to know your discount rate, please provide your email:

Digital copy of the official activation key (CD KEY) King's Bounty: Warrior of the North (Warriors of the North).

Instant delivery! Activation Key Code for the game King's Bounty: Warrior of the North (Warriors of the North) is displayed in the browser immediately after ordering!

The game will take place in the already known world Endoria: in Darion dungeon Dwarfs, as well as on the land of the Vikings, where not to swim even the famous Bill Gilbert.

Mighty Olaf, son of King Nortlingov, devoted himself to war with the undead, captivated the northern lands of Endor. He will be freed from the Necromancers icy wasteland cave gnomes, and even the heart itself Endoria - Darion kingdom. On the way to glory await Olaf treacherous enemies and new friends, a fierce battle and a great adventure.

Features King's Bounty: Warrior of the North:
• unique race of fierce Vikings and new neutral creatures;
• a new hero - the Viking Olaf;
• Valkyrie - five beautiful female warriors who accompany the hero and can be called in the battle for Fury;
• Changing skill tree, new unique talents;
• new, giving bonuses and awards for special achievements;
• additional combat spells, and a brand new school - Magic Rune;
• modified battle system, based on the use of runes;
• visy - the unique ability to skalds affecting the course of the battle;
• the ability to create new items;
n • A complete support service capabilities Steam, including Steam Cloud, and Leaderboards;
• all-new achievement system.

Obratine note:
• The game has territorial restrictions (suitable only for Russia and CIS countries)! Efficiency key in other regions is possible, but we are not guaranteed.

Activation key King's Bounty: Warrior of the North:
1. You need to download and install Steam http://steampowered.com/download/SteamInstall.msi (if not already installed)
2. Register novvy Steam account or log into an existing.
3. Go to the "My Games" and select "Activate via Steam ...", read and agree to the Steam Subscriber Agreement and enter the key received immediately after the payment.
4. After activating the game King's Bounty: Warrior of the North appear in the list of games and you can download it from steam. The installation process (download) takes about 15-50 minutes (depending on your internet channel).

Gift:
• Each buyer who leave positive feedback and a desire to write in the comment to get a gift, will receive steam key to one of a variety of games.
• Distribution of gifts made within 3-7 working days from the date of writing reviews.
• E. mail to a recall is not necessary to leave :)