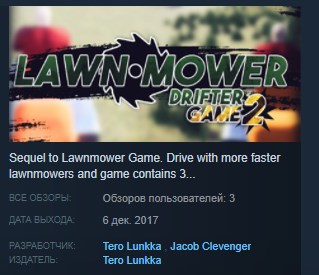 Open World: Cut grass samestyle than in first lawnmower game. Now lawnmower is much faster and there is damage system. Player need to avoid cactuses which cause damage. Player also can increase health by picking wrenches. 1 Open world

Timetrial: Drive with lawnmower in different kind of tracks and try to make First place time. There is savesystem which saves player best lap and total track time. Player can also use nitrosystem few times per each lap. 6 tracks