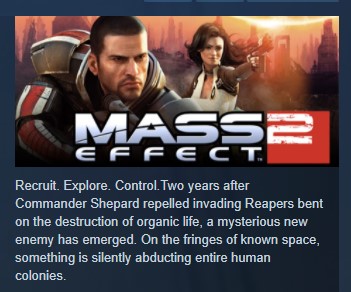 GCgame information about the seller and his items
offlineAsk a question

From the makers of Star Wars®: Knights of the Old Republic™, Dragon Age: Origins™, and Mass Effect™ comes the dark second installment in the thrilling Mass Effect Trilogy!

Two years after Commander Shepard repelled invading Reapers bent on the destruction of organic life, a mysterious new enemy has emerged. On the fringes of known space, something is silently abducting entire human colonies. Now Shepard must work with Cerberus, a ruthless organization devoted to human survival at any cost, to stop the most terrifying threat mankind has ever faced.

To even attempt this perilous mission, Shepard must assemble the galaxy’s most elite team and command the most powerful ship ever built. Even then, they say it would be suicide. Commander Shepard intends to prove them wrong.

1. If you have not installed Steam yet, then download and run the installer: http://steampowered.com/download/SteamInstall.msi
2. Create a new Steam account if you are not already registered there.
3. Log in using your Steam account through the Internet browser: https://store.steampowered.com/login/
4. Go to the "My Games" section and select "Activate via Steam ...", read and accept the Steam subscriber’s agreement and enter the key received immediately after payment.
5. After that, the game will appear in the "Library" section, and you can download it from steam.

In case of any problems or questions regarding the purchase or activation of the game, immediately contact me through the "Ask a Question" form.