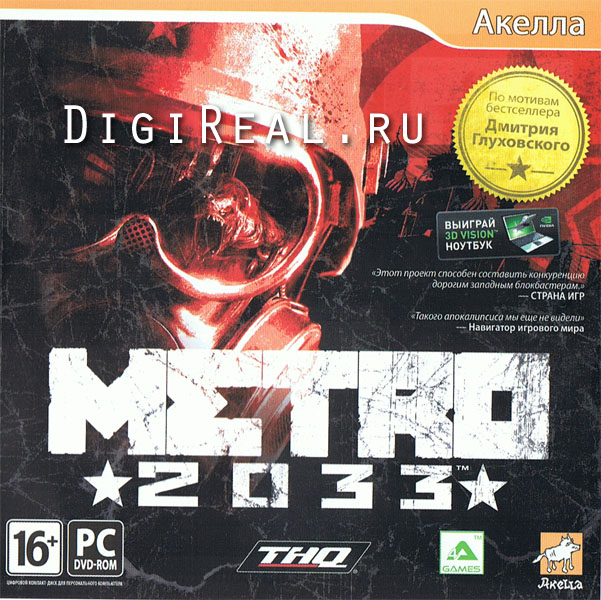 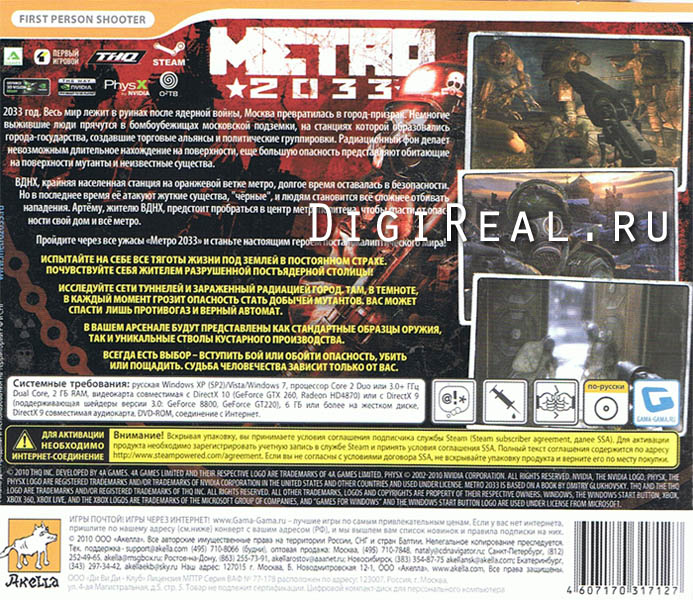 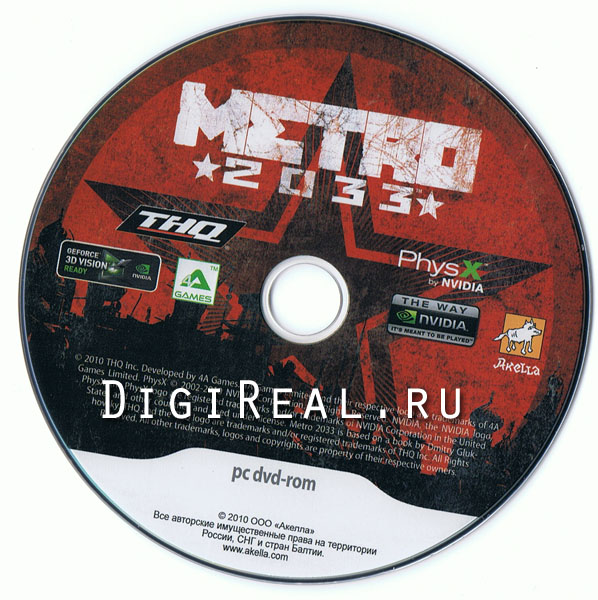 You buy a key, the official game Metro 2033 for STEAM as a scanned image of the box with the licensed game from "Akella".

In 2013 the world was destroyed by a global catastrophe that destroyed the Earth's population and make it surface in the poisoned wasteland. A handful of survivors took refuge in the depths of the Moscow underground, and human civilization entered a new Dark Age.

Now the yard 2033rd year. An entire generation of people born and raised under the ground, watching as their besieged city subway fight for survival with each other and with the nightmarish mutants that are waiting outside.

The atmospheric first-person shooter, created based on the bestselling Dmitry Glukhov. Game "Metro 2033", which the unfolding events in the devastated post-apocalyptic Moscow subway - is a dismal story of survival of the hardest, where the fate of humanity is in your hands.

You - Artem, ordinary Muscovite, born before the world apocalypse, but grew up under the ground. I never before had he not leave the limits of their, already has become home to him the subway station, but fate decided differently. Now he has to fulfill the mission of his life: to get to the center of Moscow Metro and the remnants of human society of the impending danger, or die in transit and to condemn the survivors to certain death.

Become the hero of the book, and go on your way to Artem, determine the fate of humanity!

Features:
• Metro 2033 - is a breathtaking atmospheric first-person shooter, wrapped in a shell-art graphics. Feel devastated post-nuclear Moscow!
• Witness the daily horror that is experiencing a society, living underground in constant fear.
• Please be brave and become researchers network of underground tunnels, which spread throughout the city. There in the darkness you are the prey of mutants, but not vice versa. Become a hunter or a victim.
• Explore the radiation-ravaged city. From the infected world and mutated creatures, awaiting you outside, save only a mask and a faithful rifle.
• Give your psyche in order and prepare to meet with all the horrors of post-nuclear world of the universe "Metro 2033".

NOTE: This is the official version of the company "Akella" - it has a territorial restrictions (suitable only for Russia and CIS countries)! You can enable other regions (Region Free), but no guarantee for his work in regions other than the official, we do not give!
After activation serial key in the steam, the key becomes not valid, ie, re-use it is no longer possible, so be sure to remember all the details of your account!

Indian treatises on love: "Ananga - Ranga" (a branch of a peach)