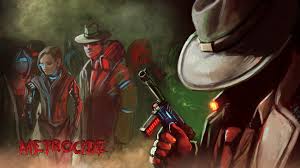 Metrocide - is a hardcore simulator assassin in nuar- and cyberpunk aesthetic. Our hero urgently need money to get out of town, so it takes up the dirty work. Killing will have on the street in the midst of people, cameras and police drones, so we must act quickly, accurately selecting the point for the shot, and after - reliably hide the corpse in the manhole or throwing off into the river. If you could not "perfect murder" - will have to get rid of the witnesses until they reported what they saw to the police.
As events occur in the future - our services are offered various gadgets, such as EMI-device against the police drones or hologram to distract passers-by. You can also take advantage of a hacker who whiten your ID. I advise you not to spare money for this procedure - because if the police scanner recognizes you suspect - you can assume that you´re dead, and it - game over.
Yes, the game is difficult. We caught a bullet politseskogo drone bandit or your very purpose - and all have to start from the beginning. Therefore stealth skills are very useful here. This Metrocide resembles another "cyberpunk stealth only life" game - Invisible inc., But even it easier to overcome than Metrocide. Something reminds Hotline Miami, namely governance, overlooking "top down", a sense of paranoia, krovischey and pixel graphics.
The developers clearly took inspiration in the same cynical cyberpunk game with open world of Syndicate 90. That´s just it, unlike Metrocide 2014 release, to distinguish a person from the post or garbage bag was pretty easy. In general, a typical indie games have to get used to the schedule.
-------------------------------------------------- -----------
Gift it is impossible to give and add to itself in an inventory, only activating on the account.
game (Gift / link) activation is added directly to the library, in the inventory can not be put off ...

Game of Life with source code