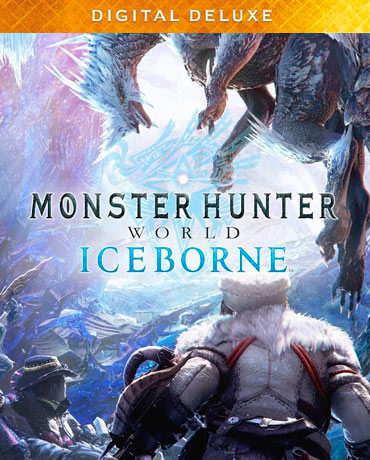 Loyalty discount! If the total amount of your purchases from the seller SOFT-KLUB more than:
If you want to know your discount rate, please provide your email:

You buy the OFFICIAL Activation Key Monster Hunter World: Iceborne DELUXE for Steam. The key you receive immediately after payment.

This content requires the base game MONSTER HUNTER: WORLD on Steam in order to play.

The diverse nature is rich in unknown fauna.
Numerous monsters hunt each other and fight for territory.
New hunting techniques take advantage of the environment.
Monster Hunter: World, a game that changed the idea of ​​hunting,
will be truly huge thanks to the massive expansion of Monster Hunter World: Iceborne!

For all 14 types of weapons, new tricks, combos and unique actions are available. Each weapon allows you to use a grasping claw, a new function of the self-gun, thanks to which you can cling to monsters. This will drain your stamina, but open up new possibilities for controlling their movement!