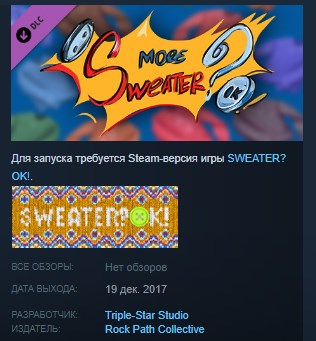 https://store.steampowered.com/app/773080/MORE_SWEATER_OK_DLC/
💎💎💎💎💎💎💎💎
MORE SWEATER? OK! is sequel for a first sweater-like game ever named SWEATER? OK! It´s a hardcore game that tuning the traditional Snake gameplay concept upside down! This time You will mantle the role of the food, running away from the pursuing Snakes.

You take on the role of a golden button that collecting stars and running away from evil snakes! You will be presented with a large randomly-generated level with large number of randomly spawning boosters/stars/snakes and snake eggs that will be scattered all over.

Your goal is to get as much points on the level as possible and to mark yourself as the bravest apple of all greeb button who ever stepped on snake´s eggs!
Key features:
Dynamic hardcore game process that will keep you entertained.
Level generator that makes every try unique!
More gameplay mechanics: a lot of new elemets that can be combined with each other!
More buttons: saws, lootboxes, shields, different scaled stars and more other!
LOOTBOXES! 2k17 meme is here for free! Because we´re indie developers and hate AAA mainstreams!
Boosters here! Use them to boost yourself for free! You don´t need to pay for them. All that you need is collect them on spawn! Kh-khm... Snakes can collect them too.

Amazing christmas soundtrack and new generic sounds!
New awesome visuals for sweater! No more eyes pain! But we are not sure about this. :D
Smash snakes eggs by clicking: ask your friend to help you! Now you can play all together here... But there is no multiplayer! Only real life multiplayer! Hey! It´s xmas game! Don´t play the games alone!
Now you have ability to saw snakes by using randomly spawned saws! Be careful snakes can use them to saw you too!
New leaderboards that display the results of players worldwide. Be the best!
Standalone expansion pack for good game that now looks more crazzy and plays better than before! You also don´t need to have an original game to launch it!
Probably the most simple and intuitive control scheme.