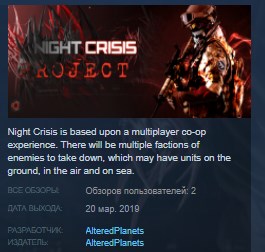 Q: What are the core features?
A: The game is based upon a multiplayer co-op experience. There will be multiple factions of enemies to take down, which may have units on the ground, in the air and on sea.

*ALL DLC WILL BE FREE , NO MICRO TRANSACTIONS OR LOOTBOXES*

Q: What kind of maps can we expect?
A: Maps will be dynamic . This means that maps will feature events like Destructible environments , weather,scripted. There are 12 maps upon release. The size and ‘openness’ of the maps are depending on scenario. Whether you can engage the enemy in vehicular combat or not, is also dependent on the scenario.

Q: What can the player customize in-game?
A: The player will be able to customize the gear which you use in the field, which includes weapons,gadgets and attachments. The player may also be able to be customize the look of his character and weapons, but nothing which can be perceived as absurd.

Q: What kind of weapons will the game have?
A: There will be a set amount of weapons for each class. Currently the weapons are inspired on their military counterparts.

Q: What type of attachments can you expect?
A: Each weapon will allow you to customize your optics, you can also add other attachments like grips, plus some weapons allow you to change the ammo type of your weapon.

Q: How many classes will the game have?
A: So far, we have four classes. It can become a possibility that each class will have a specific type of weapons and gadgets to use.


Q: What type of enemies will you fight?
A: There will be a mixture of human, humanoid and mechanical infantry; ground, aerial and naval vehicles. Hostiles will have advanced moves to use in battle, we’re trying to make them as unpredictable as possible.

Q: What type of game-modes can we expect?
A: So far, we’ve got three
- Annihilation(Survival) (neutralize all hostiles in the area)
- Assault(Domination) (Take control of the target location, you can use various approaches to achieve this)


Q: Will there be additional monetization?
A: NO.

Q: Will there be support for other Operating systems?
A: The game will have Mac , PS4 , XBOX will be looked into post release.

Q: Will the game have an anti-cheat system?
A: Yes, we are currently looking into which system will be the most fitting to the game.

STORY BACKGROUND
The year is 2020 , the End Times are here. The Matrix is falling for the Global Elites .The Natural Spirit Himself began to destroy the enemy , deploy Natural Disasters, create Heatwaves, expose corrupt leaders . So the Global Colonizers, in fear, began to create a global military police to get their order reform and oppression.

You are the Native Resistance , you are the first and last line of defense against the force known as the United Alliance(Global Elites).
You are fighting for the land , preserving the resources , and human freedom.