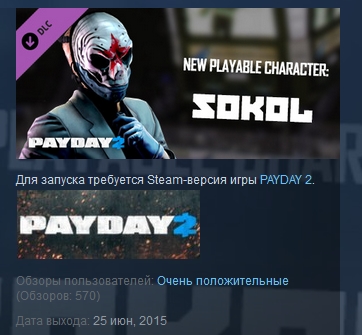 Though young, Sokol has everything to become a legendary heister.

The Sokol Character Pack is the 25th DLC for PAYDAY 2. It allows heisters to play as Sokol the Russian, the Grinder of the PAYDAY gang. Other than Sokol himself, it includes the Grinder perk deck, Sokol´s mask, Sokol´s hockey stick melee weapon and the Valkyrie rifle.
Key Features

★ A new playable character – It´s time to introduce Sokol, the Grinder of the PAYDAY gang. Though young, Sokol has everything to become a legendary heister. A gifted athlete, Sokol also possesses keen intelligence and understands his role in a team. He is fearless and physical, and uses this to get amongst the enemy, whether that be a team of hockey players or a team of SWAT.

★ Grinder perk deck – The grinder deck is inspired by ice hockey, where it reflects a strong work ethic, team play and a willingness to reduce an opponent into bloody fragments.

★ New rifle – The mythological Valkyrie would bring those slain in battle to Valhalla. This Soviet-era Valkyrie most likely did the slaying.

★ New melee weapon – Sokol being a hockey player knows how to handle a hockey stick. A beautifully fashioned length of wood. Perfectly suited for smashing a puck into the net, and smashing the fuck out of teeth.

★ Sokol´s mask – If playing as a grinder for the St. Petersburg Bombers taught Sokol the value of one thing, it was the importance of a terrifying mask that protects his handsome Russian face.


Due to changes in the Steam gift system http://steamcommunity.com/games/593110/announcements/detail/1301948399254001159
• You are required to copy the link to your Steam account and confirm that your Steam account region is Russia.
• We will add you as a friend and give you a paid game.