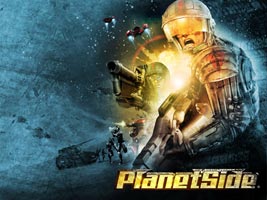 Uploaded: 06.11.2012
Content: 0611_16.jpg 10,05 kB
Loyalty discount! If the total amount of your purchases from the seller GameMarket more than:
If you want to know your discount rate, please provide your email:

PlanetSide - the world´s first massively multiplayer online FPS (First Person Shooter). Scale and wealth of tactical opportunities beyond existing PlanetSide game genre. Where thousands of players on the immense expanses of the game world at war 24 hours a day - that´s what makes PlanetSide new step in the development of the tactical team action games.

Join the army of one of the three warring parties, with friends create a detachment and go through the battle, amazing scale: in PlanetSide ten unique continents are covered by the ongoing war; the course is the heavy machinery and aircraft, orbital bombardment and an inexhaustible arsenal of weapons. Develop your character, get promoted and improved in selected specialty combat. Infantryman or sniper, spy invisible or technician, a hacker or a medic, pilot, or the driver - in PlanetSide more than 30 fighting majors, and any player will find a suitable role.

* Hundreds of different configurations of armor and weapons allow you to create a character, truly reflect your style of play

* Dozens of combat skills and specialties, allowing his team to help in the battle


CAUTION THIS IS NOT A game time cards !!!

The key is to create a new account, after activation of which you get 30 days of play.


Activation of the game:

1. You need to download the game installer link: http://www.gamemarket.biz/downloads/Planetside_setup.exe (total traffic of about 2 GB)

2. Start, select the folder in which to unpack the distribution, following the instructions.

4. Start the game, enter your username and password for your new account and clicking the "Login", find yourself in the world of PlanetSide!