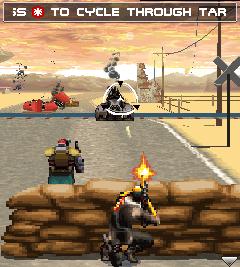 Mentas information about the seller and his items
offlineAsk a question

The toy is made in the genre of action in the third person. It is aimed at a male audience and fans of the cult series "Terminator." In "Terminator: Salvation" from Gameloft borrowed some techniques from modern console game, for example, the focus is made on the cover-up - the player has to be careful in the confrontation cyborg. The game's plot is fully consistent with the film - This is followed by the film company.